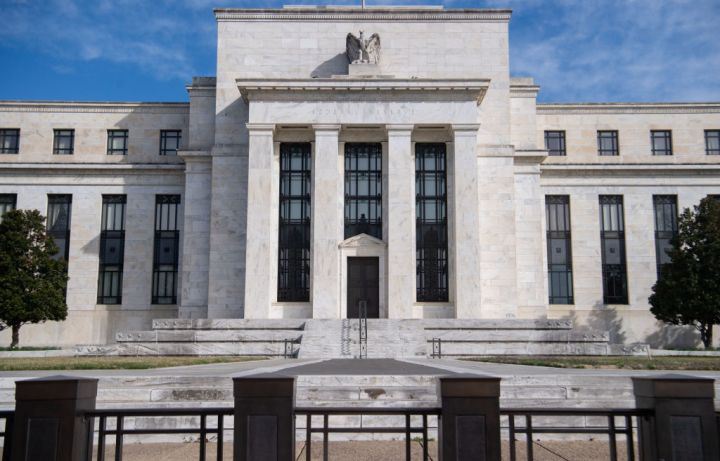 A view of the Federal Reserve Board building in Washington, D.C. SAUL LOEB/AFP via Getty Images
I've Always Wondered ...

A view of the Federal Reserve Board building in Washington, D.C. SAUL LOEB/AFP via Getty Images

Is the Federal Reserve required to change interest rates in 1/4 point increments? Why not tenths?

The Federal Reserve hiked interest rates by 0.25% last month, and it’s planning to raise its key benchmark rate six more times this year — including at its meeting next week.

The Fed can go years without changing rates, but when it does it always goes up or down in multiples of 25 basis points. The central bank’s decision to adjust rates by multiples of a quarter percentage began more than 30 years ago, back in late 1989, under Fed Chair Alan Greenspan.

“The Fed really didn’t start targeting the federal funds rate explicitly until the late 1980s,” Daniel L. Thornton, an economist and former advisor at the Federal Reserve Bank of St. Louis, told Marketplace. The Federal Reserve then began publicly announcing these targets in 1994.

“I think it’s just one of those things they got comfortable with,” Thornton said.

While there’s a lot of science that goes into economics, sometimes there are rules of thumb that economists just stick with, according to Gary Richardson, an economics professor at the University of California, Irvine and a former Fed historian.

The Fed wasn’t seeking out the optimal percentage, he explained. “They started doing a quarter point, and it worked OK because it was clear and it was infrequent and gradual,” Richardson said.

Other countries outside of the U.S. also change their rates in quarter percentages, such as Norway and Indonesia. However, others have changed them by tenths of a percent, like China.

“If you’re going to do smaller increments, then you need to make more frequent decisions,” Richardson said. “The FOMC might think their current schedule of eight meetings a year is the right frequency.”

More frequent meetings could be a hassle for staff, Richardson noted. The Fed has blackout periods a couple of weeks before its FOMC meetings during which employees can’t engage in certain financial transactions.

“If you increase the frequency of meetings, when are these people going to buy homes?” Richardson said.

The Fed has adjusted rates by 50, 75 and 100 basis points over the past three decades, but there are certain stretches of time where it has stuck with the traditional 25.

Between 2004 and 2006, the Fed moved up rates by 25 basis points for 17 consecutive meetings. Economists said the Fed wanted to tackle creeping inflation rates, even though it wasn’t too serious of a problem. Between 2015 and 2018, the Fed moved up the rate nine times by the same increment.

Thornton said that if the Fed feels a need to adjust rates, but doesn’t feel the need to move quickly, it’ll stick with the quarter-percentage change. If it’s raising those rates, getting too aggressive could scare the market.

At its next meeting, the Federal Reserve is expected to raise rates by a half a percentage for the first time since May 2000. A signal that the Fed thinks the economy is overheating, Richardson said.