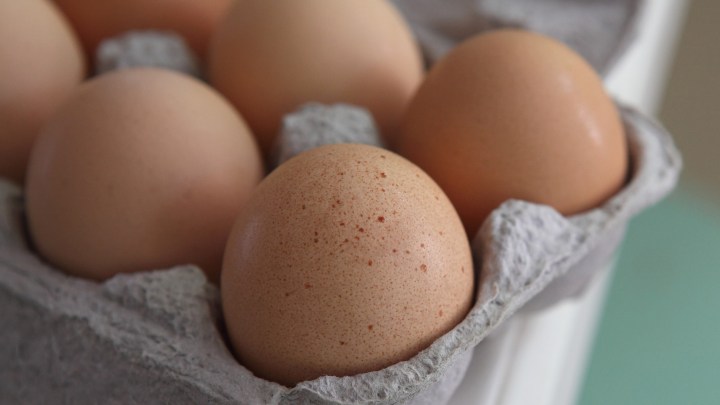 COPY
More than 27 million chickens and turkeys have been infected with avian flu, driving up the price of eggs. Justin Sullivan/Getty Images

More than 27 million chickens and turkeys have been infected with avian flu, driving up the price of eggs. Justin Sullivan/Getty Images
Listen Now

Add this to the economic forces driving up food costs: bird flu. An outbreak of avian flu is spreading through U.S. poultry flocks.

Now, consumers are seeing the impact at the grocery store.

The H5N1 avian flu is very contagious and fatal to birds. So farmers have to kill entire flocks when it reaches commercial farms.

“It’s hard to say anything aside from its devastating,” said Emily Metz, who heads up the American Egg Board.

The current wave has infected more than 27 million chickens and turkeys, she said. “There have been about 6% of our laying hen population that’s been affected.”

And with ongoing supply chain issues, that’s been enough to drive up the price of eggs.

The wholesale price was under $1.50 in early March.

“And we saw prices being reported over $3 a dozen leading into the Easter time frame. So more than double,” said Brian Earnest, a poultry industry analyst with the rural lending institution CoBank.

Outbreaks of this virus tend to taper off with warmer weather. “We’ve probably seen the peak behind us.”

Still, if the virus continues to reach commercial farms, higher egg and poultry prices could linger.