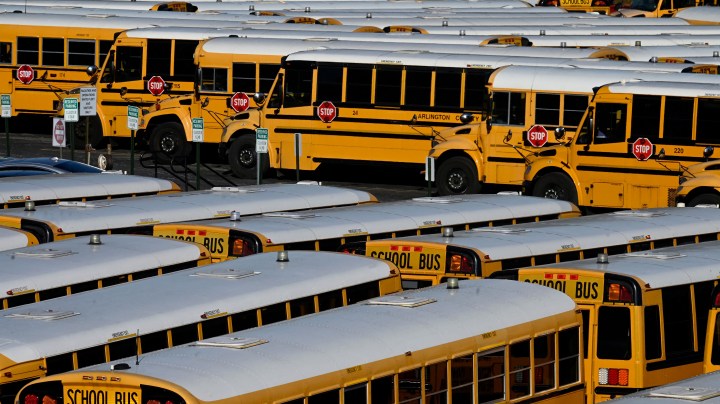 A lot of bus drivers in southern New Jersey also used to be dairy farmers.

“They would get up, they’d milk cows and then they go drive the school bus. That’s how my grandfather started,” said Chloe Williams, the third generation to run her family’s school bus company.

All 160 of her buses use either diesel or gas. Williams has considered applying for grant money to go electric.

“I have had an application in my hand, or in front of me, I guess, on the screen, but I have not actually pulled the plug and done it,” she said.

One challenge is a lot of her drivers park the buses at their homes, so she said it could be complicated to deploy the charging infrastructure. Another is that her mechanics and drivers are comfortable with diesel and unfamiliar with electric.

“Everybody would have to be retrained. When you open up the hood, there’s huge warning signs all over it not to touch because of the power going through it, the electrical current,” Williams said.

Of the nearly half a million school buses that run every day in the United States, fewer than 1% are electric, the National School Transportation Association says. Now, as part of the new infrastructure law, the Joe Biden administration is putting $5 billion toward replacing existing buses with zero-emission models. The Environmental Protection Agency is expected to start taking applications for the money later this month. But school districts and bus operators may be hesitant.

“You have a number of things that are new that a school district has got to take on,” said Matt Stanberry, managing director with Highland Electric Fleets, a company that works with school districts and bus operators to electrify their buses.

A lot of districts haven’t bought charging equipment before, and some buy the wrong kind, Stanberry said.

“Then they get vehicles, and they realize that they’ve got to rip out the charging infrastructure and start that over.”

Another major challenge is that it costs a lot of money to buy an electric bus — around $325,000, Stanberry said, if you’re buying just one. That’s around three times what a diesel bus costs.

Stanberry’s company helps with financing by buying buses and chargers and leasing them to districts. Stanberry calls it electrification as a service.

Montgomery County Public Schools in Maryland, just outside Washington, D.C., is a client of Highland Electric Fleets. Over the next four years, the district is planning for 362 of its buses — or about a quarter of its fleet — to go electric.

“Doing this will essentially alleviate the stress and strain that we have from rising and falling diesel fuel prices,” said Christopher Cram, director of communications for the district. “It will provide a level of stability in our financial planning each year and for the public dollars.”

Plus, electric buses can store energy and provide it back to the grid, essentially acting as a kind of generator on wheels.

“We could send them to hospitals or shelters and use them to keep the power on in some of these places where you really want to keep the power on,” said Matt Casale, who’s written about electric school buses as the environment campaigns director with the Public Interest Research Group.

Casale estimates it’ll cost at least $25 billion to electrify just half of the current school bus fleet in the United States.

The $5 billion from the infrastructure law will provide a good starting point for a lot of districts, he said, adding that electric school buses send a powerful message.

“They are big, they are visible, they are in our communities,” Casale said. “If we’re going to do what we need to do on electric vehicles more generally, and get more people driving them and really shift the market, the public education component is really important.”

Casale said it’s a kind of lesson: If school buses can go electric, maybe the rest of us can, too.