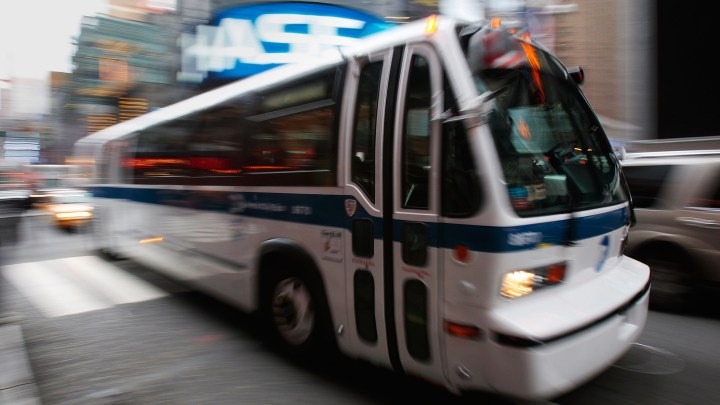 COPY
A provision in a Senate spending bill aims to ban Chinese companies from the U.S. bus market. Above, a bus in New York City. Chris Hondros/Getty Images

A provision in a Senate spending bill aims to ban Chinese companies from the U.S. bus market. Above, a bus in New York City. Chris Hondros/Getty Images
Listen Now

Momentum is building in a congressional spending bill to ban Chinese firms from the U.S. public bus market. The provision is in the Senate version of legislation that is considered “must pass” in Washington and has the support of the White House as well as North American bus industry rivals Proterra and New Flyer.

The ban would directly impact BYD, China’s leading electric vehicle and battery maker, which manufactures electric buses in Lancaster, California. To abide by “buy American” rules, BYD set up its plant in the United States and sourced at least 60% of components from the U.S. It employs more than 700 American union workers.

Proponents of the ban argue Chinese bus manufacturers, including BYD, pose a national security risk: As the argument goes, BYD’s ties with the Chinese government and military could allow Chinese spies to conduct surveillance on buses by hacking into Wi-Fi, security camera or other technologies on board. Another risk, according to BYD skeptics, is that Chinese authorities might be able to hack into and take remote control of transit vehicles on American roads.

BYD has countered that it is a nonstate-owned, market-based, publicly traded company with majority American investors. Warren Buffett’s Berkshire Hathaway is a leading shareholder. The Chinese firm says it stores no data from its buses and that all relevant data belong to its American customers. BYD officials argue the company is a victim of U.S.-China tensions.

Transportation and defense analysts suggest this is an opportunistic moment for BYD’s competitors in the U.S. to nudge aside a Chinese rival. Bus manufacturers Proterra and New Flyer have publicly endorsed the ban.