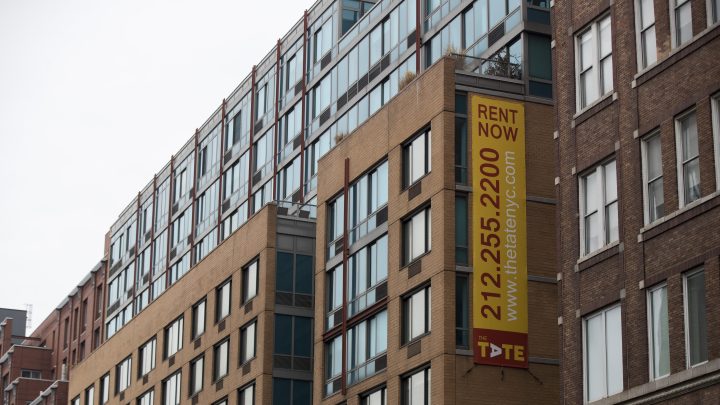 COPY
The average price to rent a two-bedroom apartment in New York City reached $2,152 in February, according to a report from Apartment List. Photo by Drew Angerer/Getty Images
Adventures in Housing

The average price to rent a two-bedroom apartment in New York City reached $2,152 in February, according to a report from Apartment List. Photo by Drew Angerer/Getty Images
Listen Now

When Maya Kosoff, a New York City-based writer and editor, began searching for a new place to live, she thought she knew what she was getting into.

“I’m no stranger to the New York City rental market,” she told “Marketplace” in an interview.  “But even based on what I’ve seen over the past, you know, almost a decade since I’ve moved here, it’s a new level of insanity in the market.”

In major cities across the country, rental prices have come roaring back after falling during the first year of the pandemic. According to an analysis by the rental website Apartment List, monthly rents jumped by an “unprecedented” 17.1% over the past year.

In New York City, that number is 33.3%. It remains one of the most expensive places to rent a two-bedroom apartment in the country.

Kosoff, who has lived with roommates in New York City since 2014, said she began searching for a one- or two-bedroom apartment in February of this year.

“I’m finally in a position financially where it makes sense for me to have my own space … or I thought, before I started this apartment hunt and realized how crazy the market is,” she said.

In a post on the publishing platform Medium, Kosoff detailed her experience with apartment bidding wars, landlords that ask for pre-payment of six months’ rent in advance (a practice that is illegal in New York City) and a “perfectly average unit” with a 20-person line of prospective tenants outside.

“I mean, New Yorkers love to line up for things, but I didn’t know that an open house for an apartment was really one of them,” she said.

After weeks of searching, narrowly missing out on apartments by minutes and other adventures, Kosoff eventually secured a lease on a two-bedroom apartment for under $2,000 a month.

“I asked the broker, ‘Do you think this is still going to be on the market tomorrow?’ And she said, ‘Definitely not,” said Kosoff. “And in fact, as I was on my way out, there was somebody else coming in to look at the apartment.”

Click the audio player above to hear Kosoff’s apartment-hunting story. Tell us your housing story using the form below, and you may be featured on a future edition of “Adventures in Housing.”