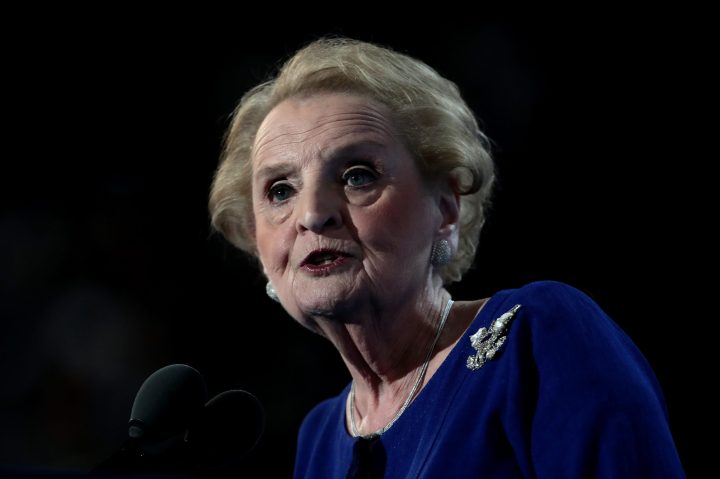 With her groundbreaking career as the first woman to serve as Secretary of State, her power pins and memorable quips, Madeleine Albright, who died last week at the age of 84, was a role model for women’s leadership to many in the workplace.

Krieg worked as Albright’s communications director, traveling the world by her side from 2012 to 2017, years after she left government.

“She was always the smartest person in the room, but she never made you feel bad about not being as smart as she was,” Krieg said. “I think like a lot of women do – would walk into a room and want to make people feel comfortable.”

Albright famously coined the phrase, “there’s a special place in hell for women who don’t help each other.”

Krieg said Albright lived those words at work, and passed them on to a new generation.

“She had women at the table and she expected if you were at the table that you should speak up. She wanted to know your opinion,” she said. “So I think about that when I’m in a meeting, and there’s a junior woman in the room. I asked them ‘Hey, can we stop and see what this person thinks?’ It just brings in different perspectives that are so important.”

That legacy inspired special education teacher Fran Basich to coordinate with the women’s employee resource group she leads at the Palm Beach County School District to show up to work in their best brooches the day after Albright’s death.

“Mine was a spray of pearls. It was a very retro looking,” said Basich.

Albright was known for her extensive collection of costume jewelry pins, which she wore strategically to send an often undiplomatic message: a snail when frustrated with the slow pace of the Middle East peace process negotiations, or a giant insect when meeting with the Russians after it was revealed they’d bugged the State Department.

“Women are definitely going to be looked at, and criticized, and praised for their clothing, and this is a way to take advantage of that,” said Kimberly Chrisman-Campbell, a fashion historian and author of “Red, White and Blue on the Runway: The 1968 White House Fashion Show and the Politics of American Style.”

Albright’s use of statement jewelry, she said, fits into a long tradition of women leveraging such traditional trappings of femininity to subtly express their power: “She can’t necessarily say what she thinks all the time, but she can say it in nonverbal ways.”

Though Albright wasn’t exactly known for mincing her words, women in spaces dominated by men are often held to very tight standards in how they present themselves says Rita McGrath with the Women in Leadership Program at Columbia Business School. They can’t be seen as too tough or aggressive, nor as too soft or unserious.

Albright gave many women that model, and McGrath said she kept doing so well into her 80s.

“I think what we’re starting to see now is the first real generation of women who are starting to come into their own in their 50s, 60s, even 70s,” said McGrath. “I think it’s a source of untapped energy that smart organizations are going to have to start paying attention to.”