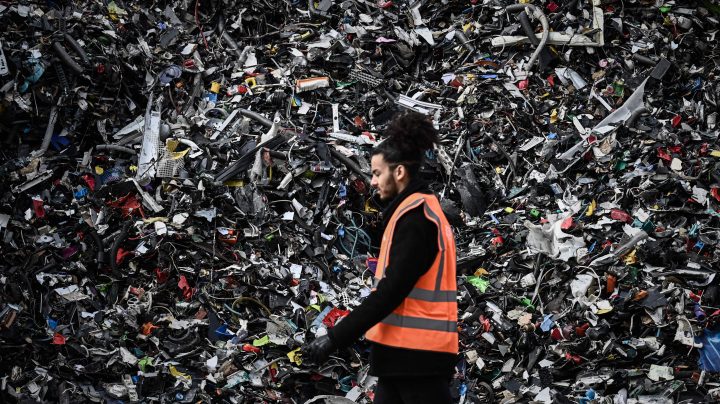 COPY
It's cheaper to make more plastic than recycle it. And that's what the oil industry is relying on as we move toward electric options. Phillippe Lopez/AFP Getty Images

It's cheaper to make more plastic than recycle it. And that's what the oil industry is relying on as we move toward electric options. Phillippe Lopez/AFP Getty Images
Listen Now

Russia’s invasion of Ukraine and the economic sanctions imposed on Russia as a result are providing regular reminders of just how interconnected the global economy is. A change in one part of the economy can have effects in a seemingly unrelated part of the economy.

The invasion has disrupted the oil market, something most noticeable at the gas station. But crude oil isn’t only refined into gasoline. Refineries turn fossil fuels into petrochemicals which, in turn, become the plastics that you encounter every day. A tight oil market may make for more expensive plastic.

For all their environmental stigma and growing unpopularity, plastics are really good at what they do: they’re lightweight, flexible, durable, and versatile. Some of them are even recyclable. And almost all of them are made from oil and natural gas.

While we all may be giving up our gas guzzlers in the near future, we’re not even close to giving up plastics.

“Plastic production is the plan B for the fossil fuel industry,” said Judith Enck, the president and founder of the nonprofit advocacy group Beyond Plastics.

“They are losing market share for transportation, so the plastics industry and the chemical industry have teamed up to make sure that plastic production will be the way they make money in the future,” she said.

The International Energy Agency said that plastics and other petrochemical products will drive global oil demand to 2050. Big oil is preparing to meet that demand, and not just in the U.S.

“China has more than $100 billion invested in crude-to-chemical projects over the next five years. And and, you know, the oil industry in general is looking more to chemicals for diversification,” said Rachel Meidl, an energy and environment fellow at Rice University.

In the short term, companies that use plastics will try to manage how much they’re using and probably just eat the additional cost, according to Tom Sanzillo, the director of financial analysis at the Institute for Energy Economics and Financial Analysis.

“But as the costs stay higher for longer, there’s no place else to go but to pass it along to the consumers. And then that risks what’s called demand destruction: The people’s unwillingness to pay the price, so they may go looking for other things,” Sanzillo said.

But there still aren’t a whole lot of alternatives. We could recycle more, but we don’t. Less than 10% of all plastic ever made has been recycled. The rest of it’s trashed.

According to Rachel Meidl, that’s because even when the price of oil and gas spikes, it’s still cheaper to produce virgin plastic than recycle what we have.

“It’s not so easy to just say that, you know, we’re going to make recycled plastics. And that’s because there’s a cost associated with that,” she said.

According to Meidl, consumer behavior will drive some change, especially in the U.S. and Europe.

But when we’re talking about plastics, we’re not just talking about reusable bags and packaging. Our smartphones are full them, and the transition to a renewable energy future depends on them, too.

“You know, all of the things that we say we want to do with electric vehicles and solar panels and wind turbines, they all require hydrocarbon inputs,” Meidl said, adding that we need to understand all the places that plastics and, therefore, fossil fuels touch our lives if we’re ever going to successfully transition away from them.