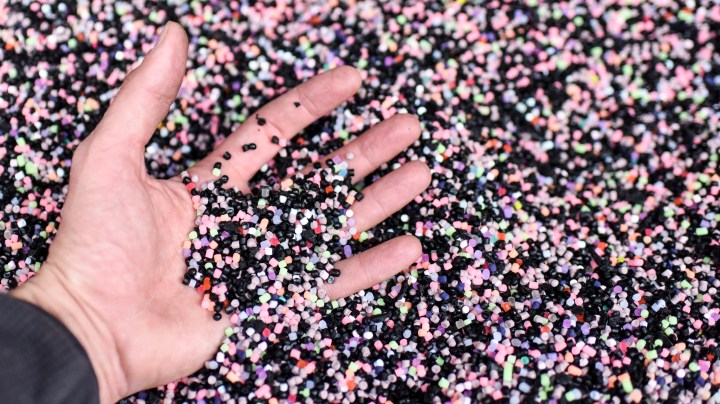 COPY
These plastic pellets are used to make shoes in France. A new report by Beyond Plastics explains the ubiquitous material's environmental impact. Sebastien Salom-Gomis/AFP via Getty Images
A Warmer World

These plastic pellets are used to make shoes in France. A new report by Beyond Plastics explains the ubiquitous material's environmental impact. Sebastien Salom-Gomis/AFP via Getty Images
Listen Now

If current production trends keep up, plastics could be a bigger source of greenhouse gases in the U.S. than the coal industry by 2030. That’s according to a report out Thursday that analyzes emissions from all the layers of the plastic chain for the first time.

Marketplace has frequently covered the climate-warming emissions produced by cars and heating buildings, but how are we going to deal with plastic’s part in all this?

The report calls plastic the “new coal.” That’s because of the manufacturing process and the petrochemicals that go into making it.

In the U.S., the industry is responsible for annual emissions “equivalent to 116 average coal-fired power plants,” said Judith Enck of Beyond Plastics at Bennington College, which produced the report.

With so much talk about electric vehicles and renewable energy these days, Enck said, many people don’t realize petrochemical production is on the rise in the U.S. It’s also where oil companies are investing now. “Plastics is the plan B for the fossil fuel industry,” she said.

“It’s pervasive because it’s quite convenient, and it’s useful in a lot of especially durable applications,” Morris said.

Plastic is durable and cheap. The trend of rejecting single-use plastics, like cutlery and straws, is a good start, Morris said. The European Union banned these in July. So did Lisa Hecht in Boise, Idaho — in her own home.

“I’m really into Mason jars,” she said. But plastic still creeps into her life, Hecht said.

Take the phone book, for example, which is essentially a huge block of paper, shrink-wrapped. “Even if I say I don’t want it, they throw it on my porch,” Hecht said.

As Morris said, plastic is everywhere — and changing that will take a lot of Mason jars and more.