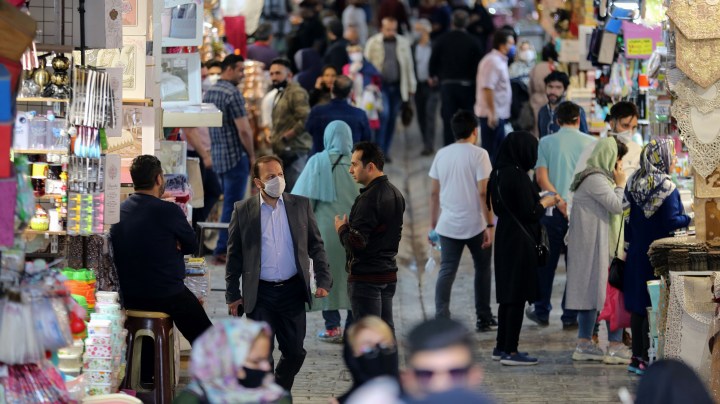 COPY
When it comes to the effects of international sanctions, everyday Iranians are experts. Atta Kenare/AFP via Getty Images

When it comes to the effects of international sanctions, everyday Iranians are experts. Atta Kenare/AFP via Getty Images
Listen Now

There are more sanctions on Russia than on any other country. More than on Cuba, which has been under sanctions since the middle of the last century, and more than on Iran, which used to hold the title of most sanctioned nation.

In the wake of Russia’s invasion of Ukraine, the U.S. and its allies have seized the international assets of the country’s so-called oligarchs, cut its companies off from the global financial system and frozen the foreign reserves of its central bank.

Even the sanctions aimed at the top end up inflicting pain lower on the economic ladder. So, what’s life under sanctions like for everyday Russians?

Iranians know a thing or two about that. “Iranians love stuff. We love iPhones. We love Gucci. We love all of these things,” said Iranian American Mana Mostatabi. But for her family back in Iran, she said, iPhones and Gucci are far from the top of the list right now because when sanctions hit, inflation follows.

“I have heard so many stories of bread prices changing day to day. You know, folks who are skipping meals because prices have gone up so much,” Mostatabi said.

In 2013, the Barack Obama administration stiffened the sanctions against Iran, in large part over its nuclear activities. That year, Donna Farvard’s uncle there was diagnosed with colon cancer.

“My uncle wasn’t able to access his chemotherapy in a hospital. My cousins had to go to the black market to purchase his medicine,” said Farvard, the national organizing director for the National Iranian American Council.

The sanctions accomplished the opposite of what they intended, Farvard said. According to her, the black market in Iran is largely run by the nation’s Revolutionary Guard military organization — “the very entity that the United States is saying they’re trying to punish through sanctions,” she said.

U.S. policymakers are well aware of the drawbacks of sanctions. Richard Nephew was the lead sanctions expert for the U.S. team that negotiated with Iran during the Obama administration.

“As with any other kind of activity, you know, in economic spaces, you create distortions if you change markets and affect things, and certainly that can benefit people in illicit spaces,” Nephew said.

Nephew said sanctions are acts of violence. They’re not victimless. But, he added, they’re an alternative to going to war, and they can be implemented with carveouts aimed at doing less harm.

“For instance, in the United States, there are a number of general licenses and exemptions to sanctions that exist to attempt to enable humanitarian trade and other such things to continue, notwithstanding the impact of sanctions,” he said.

There’s one more price sanctions that exact from Iranians in Iran and abroad, said Persis Karim, director of the Center for Iranian Diaspora Studies at San Francisco State University.

“I think the effect that sanctions create is also a view of a country and its people that is conflated with the policies of a government,” she said.

Karim said she abhors what Russia is doing in Ukraine, but “I’m just wondering if the sanctions are going to reproduce another form of misery and horror elsewhere,” she said.

Xenophobia, Karim said, is an impact of sanctions that’s impossible to measure.