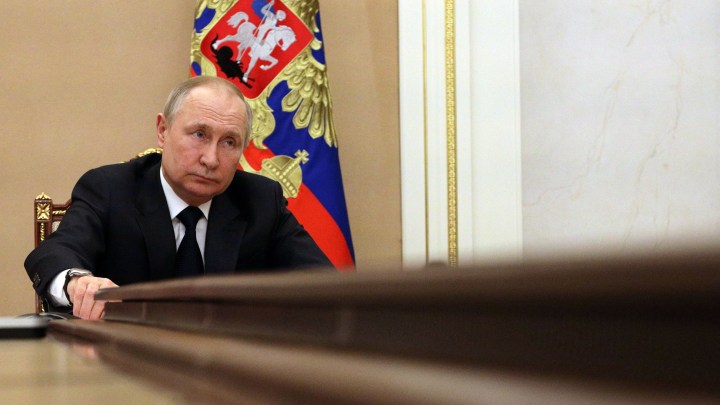 COPY
After Vladimir Putin became president, he helped fund the wealth of Russian oligarchs with state money. In return, oligarchs provided him money and loyalty. Mikhail Klimentyev/Sputnik/AFP via Getty Images

The list of sanctions against Russian oligarchs keeps growing. On Thursday, the British government sanctioned seven of them, including Roman Abramovich, the owner of Chelsea Football Club — putting an end to his attempt to sell the reigning European champions.

Here in the United States, President Joe Biden called out Russia’s oligarchs in his State of the Union speech, and the federal government has established a task force devoted to, in part, enforcing sanctions against them.

France recently seized a superyacht of one alleged oligarch, the European Union has been adding names to the list of oligarchs it’s targeting, and Japan recently froze the assets of dozens of Russian officials and oligarchs.

But let’s go back to basics. Who are these oligarchs? What are they? And how much power do they actually have?

What is an oligarch?

Money + power = oligarch. “An oligarch is a person empowered by wealth,” said Jeffrey Winters, a political scientist at Northwestern University.

“This is a term that goes back actually thousands of years,” he said. “A lot of people think that ‘oligarchy’ refers to rule by the few, but when you look into it, it always meant rule by the wealthy few.”

And Russia’s oligarchs are definitely wealthy.

“You have to have a palace of at least $100 million,” said Anders Åslund, a senior fellow at the Stockholm Free World Forum and author of “Russia’s Crony Capitalism.”

Chelsea Football Club owner and investor Abramovich, a former Russian governor, owns a Boeing 767 and one of the world’s largest private yachts.

“It isn’t a country house or residency,” Navalny said in the video. “It’s an entire city, or rather a kingdom. It has impregnable fences, its own harbor, guards, a church, its own checkpoint, a no-fly zone — even its own border crossing. It’s a separate state within Russia.” Putin denied that the estate was his.

Does the U.S. have oligarchs?

In a word, yes, argued Åslund and Winters.

“What is distinct about oligarchs in Russia is not that they are different in terms of being rich, it’s the way they are inserted into politics,” Winters said. “In the Russian case, I would label as a ‘sultanistic oligarchy.’ By sultanistic, I mean that instead of having rule of law in a civil oligarchy, the oligarchs in Russia are tamed, they are controlled, limited by a single, very powerful figure such as Putin.”

The laws, Winters said, are too weak in Russia to control oligarchs — one reason Putin needed to wrangle the cadre of influential business people himself.

“Oligarchs in the U.S. long ago accepted the rule of law as a basis of taming their behavior,” he said.

Where did Russian oligarchs get their money?

The original Russian oligarchs got their start in the ’90s, Winters said.

“When the Soviet Union broke down, there were an enormous number of state-owned assets and corporations and financial institutions, and a very small set of well-connected, smart, ambitious people basically grabbed those assets.”

Assets in oil, in gas, in finance. The oligarchs became powerful, and when Putin became president, he had to break that power.

“Eventually, that involved putting some in jail,” Winters said.

At the same time, Putin groomed a newer, different kind of oligarch, one whose wealth came from Putin and the access he granted to the coffers of the Russian state.

It would work something like this, according to Matthew Schmidt, associate professor of national security at the University of New Haven: “You would have a government deal and you would inflate your prices.”

You would get overpaid by $500 million, he said.

“The main oligarch would keep, you know, $300 million and use the other $200 million to dole out money to other people, including Vladimir Putin. And that was the deal, and that’s how everybody got rich.”

Some oligarchs were Putin’s friends from his KGB days or his days as a deputy mayor of St. Petersburg. Whomever they were, their fortunes — and sometimes their lives — now depend on Putin.

“The richer they become, the more fearful they become — they have more money to lose,” Åslund of the Stockholm Free World Forum said.

How effective will sanctions on oligarchs be?

On one hand, the sanctions are symbolically important, Åslund said. “You’re not safe if you are obedient to Putin. Putin can’t protect you. That’s very important.”

On the other hand, “it’s that litmus of loyalty that is the key ingredient to an oligarch’s wealth,” said Heather Conley, president of the German Marshall Fund of the United States. “Mr. Putin can create it and Mr. Putin can take it away.”

Conley spent years researching the Kremlin’s economic behavior and said the oligarchs’ dependence on Putin limits the effectiveness of sanctions targeting them.

“We saw a little of this in 2014 after the annexation of Crimea,” she said. “The oligarchs understood the loyalty test and many of them drew even closer to the regime.”

That is, they drew even closer to the regime despite sanctions. And in any case, Conley said oligarchs have spent small fortunes on hiding their large fortunes around the world.

Schmidt at the University of New Haven is also dubious about the impact of oligarch sanctions.

“It’s premised on an assumption that if you put economic hurt on the oligarch, then the oligarch will push Putin to change his policy in Ukraine, and there is no basis to think this whatsoever.”

Not only because oligarchs are good at hiding their wealth, but also because “these people, they’re very interested in more than just money,” he added. “They’re interested, in many cases, [in] the same vision that Putin has for this sort of Manifest Destiny of Russia. And so there are many of these men that think to themselves, ‘This is a good investment of my money to make this future Russia.'”

In other words, you can freeze a bank account, but it’s much harder to freeze an ideology.