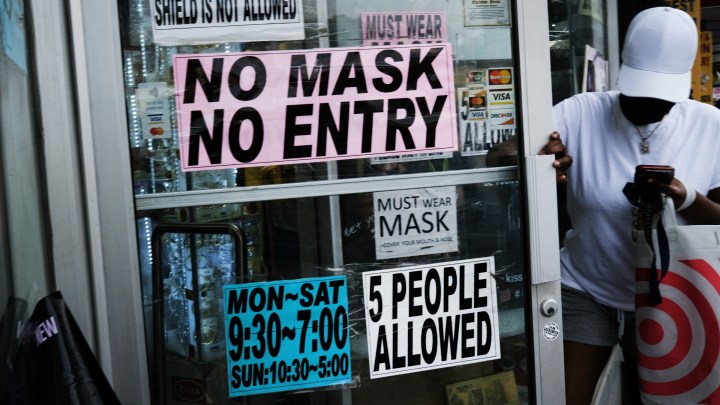 COPY
It's easy to pinpoint the start of a pandemic. Determining when it ends is far less clear. Spencer Platt/Getty Images
COVID-19

It's easy to pinpoint the start of a pandemic. Determining when it ends is far less clear. Spencer Platt/Getty Images
Listen Now

Do you ever dream about the end?

“Actually, there’s one time where I dreamed about going to the beach, that COVID was over and trying coconut juice,” said 9-year-old Olivia Jean-Baptiste in Chicago.

She said she’ll know COVID-19 is over when she can do regular kid things again.

“There was one day that one of the students in my class for dance got tested positive and that ruined my weekend. My friends couldn’t come over.”

Everyone has their own version of what the end looks like.

“We just need security in the fact that we don’t think we’re going to close again,” said Sava Farah, a restaurateur in Ann Arbor, Michigan.

For Dr. Priya Sampathkumar, an epidemiologist at the Mayo Clinic, it’s when she stops seeing so many deaths.

“Dealing with that is hard. Every patient you lose takes a little bit of you.”

It’s hard to overestimate the impact that the pandemic has had on our lives — millions of deaths around the world, drastic changes to daily life, shuttered offices and careers that have ended. As we move into the third year of this pandemic, it’s looking more and more like COVID-19 is something we may have to live with forever. But that doesn’t mean we’ll be living in a pandemic forever.

The death rate, infection rate and time between new outbreaks is what public health experts will use to decide when the pandemic is officially over. But it’s likely that COVID will become a seasonal virus that peaks each winter.

“We will see flares in different parts of the world,” Sampathkumar said. “But it will all become much more manageable, and we’ll be able to handle it kind of like we do the flu.”

When this will happen is harder to predict. Sampathkumar said she’s hesitant to say we’re nearing the end because that’s what many people thought before the omicron variant emerged.

The World Health Organization has yet to set metrics for when what it calls a public health emergency of international concern will end. But J. Alexander Navarro, assistant director of the University of Michigan’s Center for the History of Medicine, expects local governments to signal their version of the end earlier by relaxing public health rules. That’s what happened during the Spanish flu; most of the U.S. decided it was over in 1919, but half the country continued to see outbreaks.

“It was way too premature to declare that pandemic over,” he said. “But there was a lot of social pressure to do so. People wanted to get back to life as normal.”

“So there’s an inevitable politics to declaring a pandemic over,” said Keith Wailoo, a professor of history and public affairs at Princeton University.

While it’s pretty easy to mark the beginning of a public health crisis, it’s harder to define its ending. That’s because if a virus isn’t eradicated, the threat of it never fully goes away, especially for vulnerable communities. Take, for instance, the AIDS epidemic.

“For some, HIV/AIDS is over, but for many it is not. It’s still a part of their own lives, it’s part of their community. And it’s transformed the world as they know it,” Wailoo said.

If COVID sticks around, it will continue to disproportionately affect the elderly, people who can’t be vaccinated and workers in health care and nursing homes. And we might have to adjust some public norms to accommodate. Employers may need to build seasonal outbreaks into their calendars, assuming employees will call out sick and business will slow. People may have to wear masks during COVID season. These kinds of changes often happen after major virus outbreaks.

“Pandemics open up conversations and transform society sometimes in ways that today we look back and we say, ‘Of course! People have always washed their hands.’ Well that’s not true,” Wailoo said.

Handwashing didn’t become more common until the 20th century during outbreaks of typhoid and tuberculosis. And condoms were only a method of birth control until the AIDS epidemic.

Ultimately, Wailoo said the pandemic will only end when people feel like it’s over. For him, that’ll be when someone near him coughs and he doesn’t flinch.