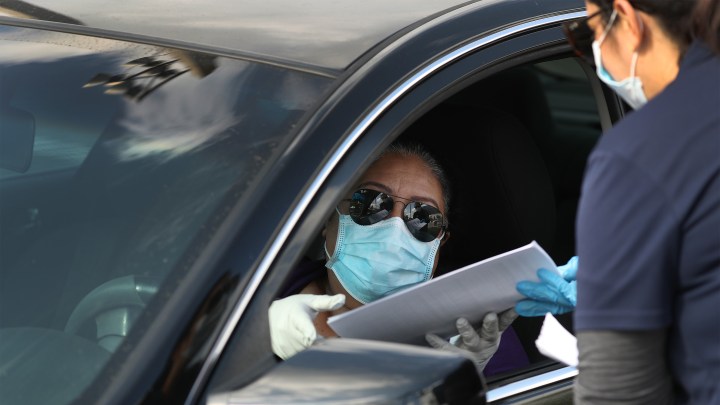 COPY
A Florida resident receives an unemployment insurance application in April. Many recipients could be shocked if the temporary extra benefit terminates at the end of July. Joe Raedle/Getty Images
COVID-19

A Florida resident receives an unemployment insurance application in April. Many recipients could be shocked if the temporary extra benefit terminates at the end of July. Joe Raedle/Getty Images
Listen Now

The $600 a week in extra benefits provided to every jobless worker who’s on unemployment insurance right now is set to expire July 31. Part of the CARES Act, the Federal Pandemic Unemployment Compensation program is being paid to roughly 29 million Americans. And if Congress doesn’t do something by the end of next month, it could get economically ugly.

Since COVID-19 hit in March, millions of workers have been furloughed or laid off. Congress has responded by adding the extra unemployment money to every state unemployment check in the country. Economist Michael Strain at the American Enterprise Institute said that is “providing a lot of income security to workers, and it supported overall consumer spending.”

Those payments have replaced 10% to 15% of Americans’ pre-pandemic income. If the money’s cut off at the end of July, Michele Evermore at the National Employment Law Project said nearly 30 million unemployed Americans will be thrown back onto state benefits alone.

“I think people will be very shocked, the day that the $600 stops,” Evermore said. “Workers can earn as little as, like, [in] Arizona, the maximum benefit is only $240 a week.”

She thinks Congress should renew the program at $600 a week until unemployment falls below double digits again.

But Strain argues that the current benefit level is so high it discourages people from seeking new employment.

“Ideally, you would extend supplemental unemployment benefits, but you’d put them on a glide path — start at $300 in high-unemployment-rate states and kind of phase it out from there,” Strain said.

What should not be an option, according to Mark Hamrick at Bankrate.com, is for federal pandemic unemployment checks to stop flowing on a dime in the last week of July.

He said that would raise the risk “that this economic damage does persist because coming into this crisis, most Americans were living paycheck to paycheck, and then, all of a sudden, for many the paychecks ended.”

And they won’t start up again until the unemployment rate falls and there are jobs to go back to.