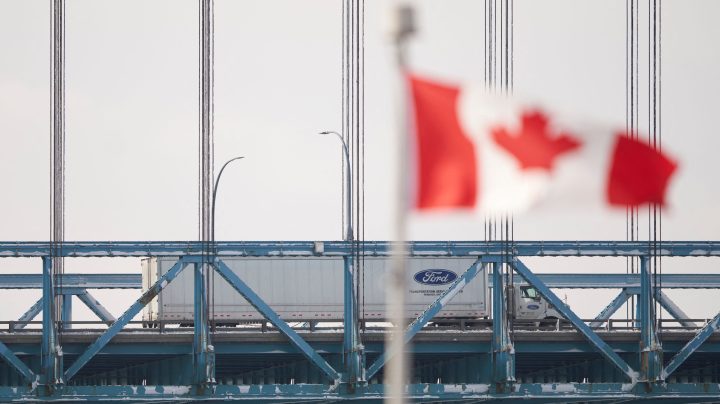 COPY
The Ambassador Bridge is once again up and running, but now there are questions about how to make the bridge less vulnerable to shutdowns. Geoff Robins/Getty Images

The Ambassador Bridge is once again up and running, but now there are questions about how to make the bridge less vulnerable to shutdowns. Geoff Robins/Getty Images
Listen Now

Traffic is finally flowing again on the Ambassador Bridge, which connects Detroit with the Canadian province of Ontario.

Protesters angry about vaccine mandates in Canada had managed to block the bridge for much of the last week, cutting off a critical crossing that carries about one-quarter of all the goods traded between the United States and Canada.

That’s a lot of commerce depending on one bridge.

The fact that so much U.S.-Canada trade is concentrated on the Ambassador Bridge made it the perfect target, said cross-border trade attorney Dan Ujczo.

“If you want to shut down the Canada-U.S. economy, that’s where you do it,” he said.

The bridge is vulnerable for several reasons. It’s almost a century old, and it can back up in bad weather. And Ujczo said 9/11 sparked fears that the bridge could be a target for terrorists.

“There have been folks, myself included, but a number of others that are kind of the Canada-U.S. border nerds, if you will, that have been working on what do we do to enhance our border infrastructure,” Ujczo said.

One of those enhancements is a new bridge under construction to connect Detroit and Windsor, Ontario, to open as early as 2024. It hasn’t been easy. The U.S. and Canada spent years wrangling with the American family that owns the Ambassador Bridge.

The bridge is public infrastructure, but it’s privately owned.

“I’m still not used to the idea,” said Flavio Volpe, the president of the Automotive Parts Manufacturers’ Association in Canada. He estimates damage from the recent blockade cost his industry alone more than $1 billion.

The last week was another wake up call, according to Laurie Tannous of the University of Windsor’s Cross-Border Institute.

“Going forward, we’re going to see companies say, ‘All right, we need a different plan in the event something like this were to happen again,'” she said.