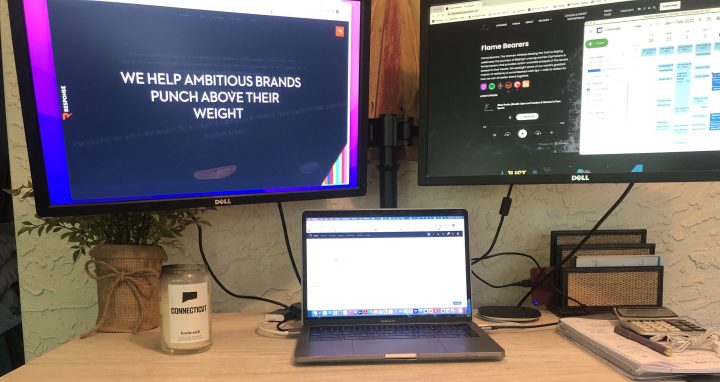 COPY
Carolyn Walker’s remote workstation in Bradenton, Florida, more than a thousand miles away from the marketing agency she runs in New Haven, Connecticut. Courtesy Walker
Microbusinesses and the pandemic

For many small businesses, “pivot” was the theme of 2020, and taking it “day by day,” the theme of 2021. For some of them, 2022 could be the year certain pandemic pivots become permanent.

Carolyn Walker, CEO of Response Marketing in New Haven, Connecticut, permanently gave up her agency’s physical office space almost a year ago. The following is an edited transcript of her conversation with “Marketplace” host Kai Ryssdal about the company’s transition from “work-from-home for now” to “work-from-home forever.”

Ryssdal: [Laughing] It was not meant to be. I apologize.

Ryssdal: Well, let’s get to the learning side of this thing. One of the big ones is that last time you and I spoke, you had just decided to, or were about to, physically go completely remote. How has that worked out?

Walker: It’s actually worked out better than I thought. The things that that are weighing on my mind and were big concerns to me, ended up not being that big of a deal at all. And the things that I wasn’t really worried about ended up being issues. It was interesting.

Ryssdal: Give me a couple of “for instances.”

Walker: The things that I thought wouldn’t be that big of a deal were, you know, the separation, right, like, physically being separated from each other, and not having so much socialization with your co-workers, and things like that. And that ended up being a really big deal, especially for me — I really felt very isolated at times. And I have to say, last winter was one of the hardest winters for me that I’ve ever had, I was actually pretty depressed. And so this year, I decided to head south and get into the warmer weather. Which is the benefit of being 100% remote.

Walker: Yeah, we did. You know, the space that we were renting, we saved money on parking, because we’re in a downtown location. We saved on all the expenses that you could imagine with running an office from, you know, electricity, to your internet connection, all of that. So it was a big savings, to the tune of about $60,000

Ryssdal: Oh, that’s not chicken feed. Are you going to try to find a happy medium somewhere?

Walker: Yeah, so we’ve already actually employed that. It’s been a little bit of an up and down because of the different variations of the virus. So as things have gotten more intense with the pandemic, we have leaned more into just staying home, whereas the times where it seemed to be a little bit safer, we ended up doing things together. So we did fun things together, you know, just going out and reconnecting from a social perspective. We also got together in person to actually work together, at cooperative workplaces that we have access to.

Ryssdal: How has it worked on the creative side of your business, right? Because [in] advertising and marketing, you got to come up with ideas. And it can be tough, staring at a Zoom screen, to make that happen.

Walker: Yeah, that was a big, big concern of mine going into the pandemic. You know, how the heck are we going to do this? Are our ideas going to be as creative as we were before? But, in fact, our creativity has never been stronger. We put things in place to help make sure that we didn’t lose that ability to be highly creative.

Ryssdal: Do you suppose, just in terms of running your business, that this is kind of the way it’s gonna be from now on? There’s gonna have to be some flex, but also hybrid, and we’re gonna have to make it work, right? You’re just gonna do that?

Walker: I do. And I think that the workforce is demanding it, to be honest with you. If you can’t be flexible as an employer, I think you’re really going to be limited with who you can attract and retain. So I think it is the way business is going to be run from now on. I don’t think you have a choice.