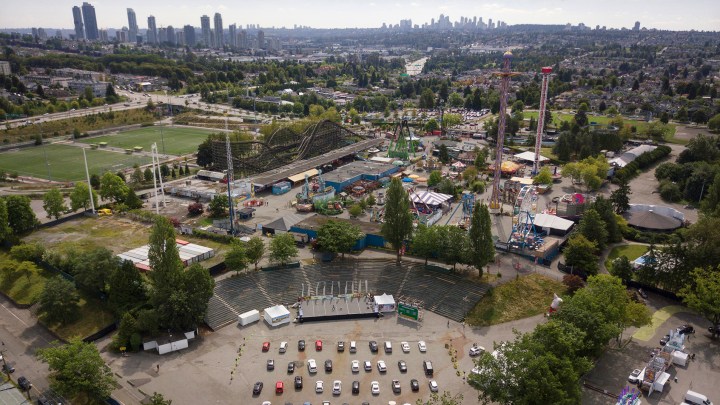 COPY
An aerial of the Pacific National Exhibition in Vancouver, British Columbia. Courtesy of PNE
COVID-19

An aerial of the Pacific National Exhibition in Vancouver, British Columbia. Courtesy of PNE
Listen Now

The global pandemic has brought the tourism industry to a standstill, and that’s devastated places like the Pacific National Exhibition in Vancouver, British Columbia. The PNE is known for its amusement park and live events, both of which have been hard hit by the pandemic. But an unlikely source of business could help the PNE keep the lights on: film production.

“Marketplace” host Kai Ryssdal spoke to Shelley Frost, president and CEO of the PNE, about the pivots that the organization has had to make. The following is an edited transcript of their conversation.

Kai Ryssdal: So for those who are not familiar with the Pacific National Exhibition up in Vancouver, what is it? What do you guys do?

Shelley Frost: That’s a great question. We are a $60 million-a-year nonprofit organization, we have a fair that we run every year, we run an amusement park, and year-round we do music festivals, concerts, sporting events, community events. And we also work in the film industry. So when we have assets that are not being utilized, they’re used by film production crews up here.

Ryssdal: Let’s get to film in a minute. But all of those things you reeled off in the beginning of that answer sound like things that a pandemic would be not great for.

Frost: You know, we’ve been obviously doing everything that we can to work within the health guidelines to bring back smaller events, do the kind of business that we can do. But you know, I mean, we’re good at doing large-scale events, concerts with 10,000 to 12,000 people. Obviously, not things that we can do in a pandemic. And so we’re trying, like everybody else, to pivot and do things differently. But challenging, for sure.

Ryssdal: Yeah, for sure. So let’s talk about the pivot. Film production is working out for you?

Frost: Yeah, you know, the film industry came up really strong. As soon as our phase two [of the pandemic reopening plan] opened up, we’ve been thrilled to have so many productions come back up to [British Columbia]. You know, film space is absolutely at a premium. Most places are turning film clients away, and … right now is not enough set deck space, or film production or office space, really in the Lower Mainland.

Ryssdal: We should point out that Vancouver and British Columbia and the entire country of Canada are doing better than most parts of the United States in terms of handling this virus. Are you banking on things staying this way that you’ll be able to retain this kind of film production capacity?

Frost: You know, it’s cyclical all the time. And it depends a lot on the foreign exchange, it depends on a lot, you know, a lot of different economic factors that are going on down in the States as well. But there’s a baseline that stays strong, and we see spikes in it at any given time. I do think that film production will stay strong in Vancouver and in the Lower Mainland for the next while. I think BC specifically has done a really great job of managing the pandemic and keeping the curve flattened to a degree that it’s not putting a lot of pressure on our health care system. I think that’s given people a lot of comfort in coming up here and knowing that they can film safely. And we’ve got a lot of big sites. So you know, at the PNE, for an example, we’ve got production companies coming in and taking over two, three or four buildings at a time because they can keep their pods together, their bubbles together. They can do their screening on site really, you know, effectively, and not be spread out between a lot of different sites.

Ryssdal: Yeah, I have to say, you sound remarkably positive for a woman who’s running an organization, you know, where I’m going, right? Your audiences are down, you’re losing $52 million in revenue. I mean, come on, right?

Frost: You know what, honestly, it’s funny that you say that. But the one thing that I do know for sure is that the PNE has been around for 110 years. [There are few] organizations that ever make it through 50 to 100, nevermind 100 years. There’s no question in my mind that we have the kind of team and innovation that’s going to get us out of this. But, you know, as the president and CEO, I have to be looking forward to a positive future. And I’m staying very focused on what we can do and not what we can’t.