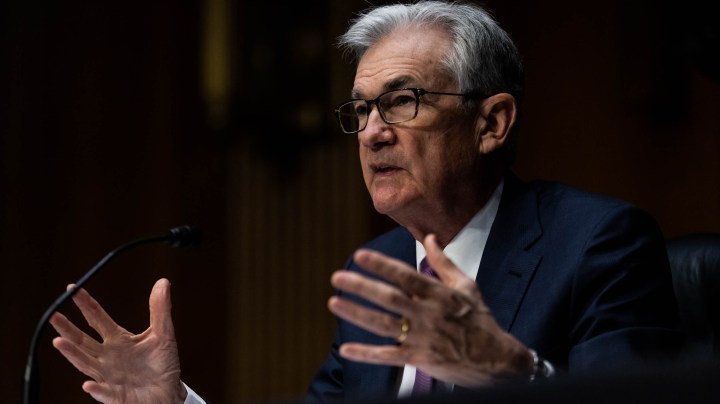 COPY
Federal Reserve chief Jerome Powell has turned his efforts toward containing inflation. The employment cost index is one of the economic indicators the Fed examines in setting monetary policy. Graeme Jennings-Pool/Getty Images

Federal Reserve Chair Jerome Powell has said that among the many economic statistics he relies on is a quarterly report called the employment cost index, which — for the fourth quarter of 2021, encompassing October through December — comes out this Friday.

It’s not quite the same as the jobs and jobless numbers we get weekly or monthly. The index is based on a Bureau of Labor Statistics survey of more than 7,000 public and private employers that totes up the costs of employing workers — including wages and health insurance, retirement packages and other benefits — all broken out by occupation and other parameters.

The ECI becomes especially important at times like these, when wages and prices are both shooting up.

“This time a year ago, [United Parcel Service] was paying $13.50 an hour for people to work the night shift,” said Michael Gritton, executive director of KentuckianaWorks. The workforce development agency is located in the Louisville region of Kentucky — home to major employers, including Ford, GE Appliances and UPS’ international air hub.

Other labor expenses are also going up for employers that are fiercely competing to attract and retain workers in this tight job market, said Frank Fiorille, vice president for risk, compliance and data analytics at small-business payroll processor Paychex. “Retirement plans or sign-on bonuses — they’re having to enhance their benefits just to keep up with the big guys.”

The employment cost index takes all that into account. Plus, it can tell us whose wages, in which occupations, are rising more and less — that is, who’s benefiting most from the tight pandemic labor market — said Erica Groshen, commissioner of the Bureau of Labor Statistics from 2013 to 2017 and now a senior economic adviser at Cornell University’s School of Industrial and Labor Relations.

“We know that over the past 30 to 40 years, we’ve had big growth in wage inequality,” she said. “If we see more wage gains amongst lower-wage occupations, well, we’re seeing a narrowing of inequality.”

In the most recent employment cost index report, based on the third quarter of 2021, total compensation for civilian workers rose 3.7% year over year, up from 2.8% in the second quarter — faster than at any point since the early 2000s. Wages and salaries alone for private sector employees rose 4.6%.

“Macroeconomists, thinking about what the Federal Reserve should do — they look at a big wage increase number and get worried,” said Claudia Sahm, a former Fed economist and now director of macroeconomic research at the Jain Family Institute.

“You expect the stuff you want to buy is going to be more expensive, you go into your boss’ office and ask for a raise,” Strain said. “All of a sudden, labor costs are higher, and so your employer raises the prices it charges its own customers, and you see a sustained rapid increase in wages and prices.

“The concern is, inflation is starting to become entrenched,” Strain continued. “Businesses and workers and households are starting to expect that prices are going to go up and up and up. They’re starting to make decisions based on those expectations.”

That is the dreaded “wage-price spiral.”

But Claudia Sahm argues that the distribution of compensation gains — more for low-wage workers and less for high-wage workers — should temper inflation worries.

“This economy looks really good to the vast majority of Americans,” Sahm said. “It is the case that prices have risen more quickly than in the past. Wages at the bottom have risen even more quickly.”

Sahm added: “This is highly disruptive for employers, and you hear a lot of complaining and hand-wringing. And for some small businesses, it really is tough to compete with big corporations that can pay more to bring workers in.”

But Sahm pointed out that when labor costs go up, businesses don’t have to raise their prices in lockstep. They have other options: They can get more productive, through investing in automation and artificial intelligence.

And they can reduce their profits. “Corporate earnings, they’re really good,” Sahm said. “Right now, to get the workers they need, to serve the customers that are coming in, they’ve had to pay more. But they could pay more. They are still very profitable.”

But Michael Strain said the compensation hikes employers are offering to compete in this pandemic economy are worrisome.

“When you’re talking about wage increases of the magnitude that we’re seeing — about 4.5% [year over year in the private sector] — businesses have a really hard time dealing with that without increasing the prices they charge.”

Even if Friday’s fourth-quarter EPI reading comes in high again, Sahm won’t see it as a sign of great danger.

“Fed Chair Powell has talked about the high readings of the employment cost index as a risk, something they’re watching,” she said. “But they’re not going to raise interest rates because wage growth is high. What they’re looking for is it to spill over into consumer prices.”

And how will we know when that’s happening?