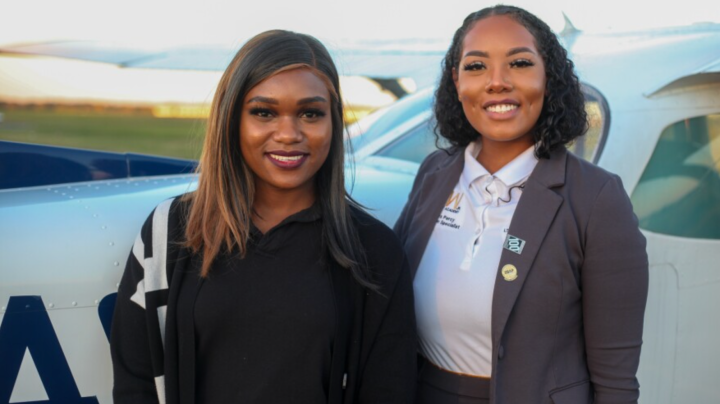 Flight instructor Zakiya Percy is helping student Carlin Bratcher prepare a single-engine Cessna 172 for a flight lesson. After routine safety checks and a brief taxi, they take to the sky, circling Mississippi’s Olive Branch Airport, with Bratcher practicing turns and softening her landings.

“Look at you, I barely had to do anything,” Percy told Bratcher back on the ground. “My job is easy.”

In addition to coaching beginners, Percy is also logging the airtime she needs to eventually fly for a major airline.

As an African American woman, Percy is demographically underrepresented among aviators. But not where she teaches.

“Here at Luke Weathers Flight Academy, the female instructors outweigh the male instructors, and that’s a gem,” she said. “It’s really not seen at a lot of flight schools and in the airline industry in general.”

The Organization of Black Aerospace Professionals founded the nonprofit Luke Weathers Flight Academy three years ago to help expand opportunities for women and people of color aspiring to earn their wings. It’s named after a Tuskegee Airman who was the first Black air traffic controller at Memphis International Airport.

Nationally, women account for roughly 6% of pilots, according to the Bureau of Labor Statistics. Black pilots make up about 3% of the profession, and an advocacy organization estimates that under 1% of pilots are Black women.

“They’re there,” said Captain Albert Glenn, a retired FedEx pilot who runs the academy. “There are individuals who want to be in the aerospace industry, but the pathway for them is a difficult one.”

For starters, pilot training is expensive. At Luke Weathers it costs around $45,000 — roughly half the price of some schools. To further defray costs, the academy offers scholarships.

It also gears programming toward teenagers to leave an early impression.

And inspiring the next generation can’t wait, said Shannon Morrison with the Center for Aviation Studies at the Ohio State University. Analysts predict a shortage of more than 12,000 pilots in North America as early as next year due to attrition.

Morrison said it’s an opportunity for the industry to get a makeover for the better. “At the end of the day, a diverse community— diverse organizations perform better.”

And that starts, she said, with building a more diverse pipeline.