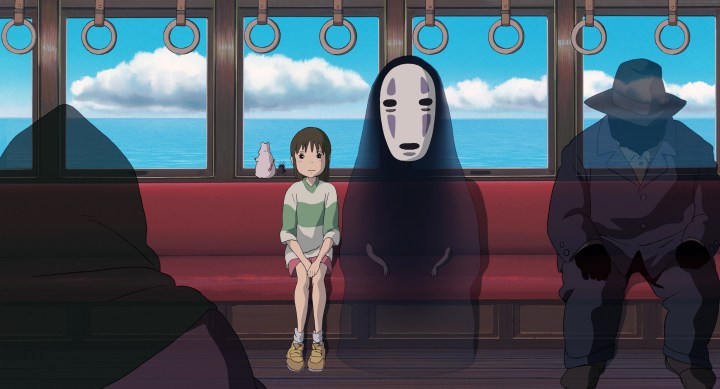 A view of the Japanese animated film "Spirited Away," which was released in Japan back in 2001. Courtesy of GKIDS

A view of the Japanese animated film "Spirited Away," which was released in Japan back in 2001. Courtesy of GKIDS

Characters from popular anime series and shows are getting the luxury treatment.

At the beginning of 2021, the Spanish luxury house Loewe launched a “My Neighbor Totoro” collection that included wallets, handbags and shirts featuring characters from the popular Miyazaki film. Now, the brand has released another collection in partnership with Studio Ghibli, this time with characters from “Spirited Away.”

Gucci has done similar collaborations, launching a Doraemon capsule collection to celebrate the 2021 Chinese New Year. The titular character of the anime and manga series — a blue robotic cat from the 22nd century — was featured on more than 50 items, including jackets, shorts, sneakers, handbags and wallets. The Italian designer also created a virtual fashion collection with North Face that debuted on Pokémon Go, allowing players to don T-shirts, hats and backpacks.

Products in Loewe’s capsule collections range between $350 to almost $6,400, while items in Gucci’s Doraemon collection ranged between $1,600 and $48,000. It’s a world away from Hot Topic, Redbubble or Etsy.

How these brands are marketing these collections

These limited-edition collections allow high-fashion brands to experiment with their products without having to make a long-term commitment, according to Thomai Serdari, a luxury marketing professor at New York University’s Stern School of Business.

Serdari said she thinks a brand like Loewe is developing these collections to target younger customers — trendsetters who shop more often and are “enamored” by the characters — while steering the brand away from older customers who are looking for classic designs.

Gucci specifically, she noted, is aiming to target a variety of subcultures.

“They really understand that today’s younger customers are so fragmented,” Serdari said. “You need to tap into different niches.”

These brands are especially vying for the attention of younger consumers in China, which comprises one-third of the global luxury market, said Katie Sham, principal of retail and consumer goods at Oliver Wyman.

According to a November report from Oliver Wyman, 50% of Chinese luxury accessories and fashion shoppers entered the market in the past 12 months, and 40% of those new customers were Gen-Z (which the report defines as those younger than 25 years old).

As China Daily reports, Japanese animated films have several generations of Chinese fans, and many born in the 1980s and 1990s have a “nostalgic feeling” toward anime they watched in their childhood. The daily news site notes that many in China consider “Spirited Away” a “masterpiece.”

Along with China, Loewe and Gucci have extensively marketed to other Asian countries, launching pop-up stores in Japan, Thailand and Vietnam.

Sham said collaborations like these are able to attract two sets of groups: both the fans of a particular fashion house eager to buy its products, and the luxury shopper who’s a fan of the intellectual property.

Unlike brands such as Chanel or Hermès, which are family-owned businesses, Loewe is part of the LVMH conglomerate and faces the pressure of shareholders, according to Sham.

Companies like Loewe and Gucci experience more of a push to “commercialize” their brands, Sham explained.

“You will never see Chanel collaborating with Hello Kitty,” she said. (Although there are certainly people eager for a crossover.)

Nor, she added, will you see a fashion house like Hermès collaborating with Doraemon. She said this wouldn’t fit the image of either brand, which are focused more on brand heritage or a sense of timelessness.

But some designers, like Takashi Murakami, have embraced the notion of blurring “high” and “low” art. Serdari credits the origins of these types of collaborations to Murakami, a Japanese artist whose paintings and sculptures are inspired by anime and manga. Murakami’s collections with Louis Vuitton “set the stage for other similar graphic explorations,” Serdari said.

The collections, which premiered in 2003 and were released for a further 12 years, included the company’s Speedy bag refashioned with bright, multi-colored monograms, along with accessories that featured what Vogue called “manga-inspired characters.”

“Now, we are more receptive to seeing that sort of experimentation in clothing,” Serdari said.