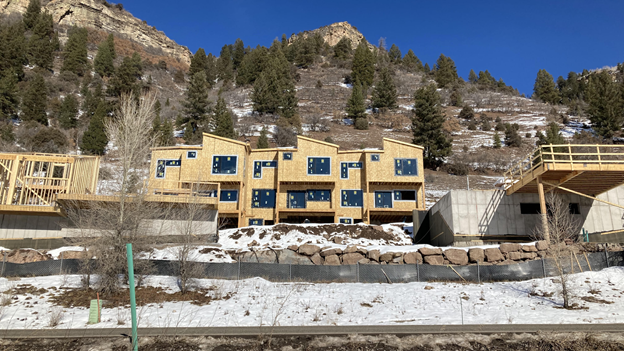 COPY
The new Sunnyside affordable housing project. Its name refers to the abundant sunlight the south-facing hillside gets and to its rooftop solar panels, which generate clean energy. Matt Hoisch

The new Sunnyside affordable housing project. Its name refers to the abundant sunlight the south-facing hillside gets and to its rooftop solar panels, which generate clean energy. Matt Hoisch
Listen Now

A construction crew in Telluride, Colorado, has been building homes on a hillside along a road that will soon have 30 new affordable housing units. DeLanie Young, Telluride’s mayor, looked on from outside the construction area.

“It’s so satisfying to see this take shape,” she said.

The town, along with the county, is developing the project, called Sunnyside — a reference to the abundant light the south-facing hillside gets. It’s also a nod to the rooftop solar cells that will make the homes net zero for carbon emissions.

“We knew it would cost more money in the initial stages to do it in this manner,” Young said. “But it would have been irresponsible of us to not consider this, simply because of its geographical location.”

Household energy use accounts for about 20% of greenhouse gas emissions in the United States. At the same time, housing is in short supply — nearly 4 million units short, according to Freddie Mac.

And in Telluride, there’s an affordability issue. It’s an expensive place to live, with houses in the mountain resort town selling at about $2 million on average last year, according to Telluride Consulting, a local real estate analysis company. Sunnyside will offer rentals at below-market rates for the workers supporting that resort economy.

Lance McDonald, the town’s program director, estimated that the project’s development costs increased by 6% to completely offset its emissions and enable it to reach net zero year over year.

According to McDonald, that “means that the project will be generating the same amount of energy that it would use on an annual basis.”

Essentially, the housing is still connected to the electric grid, but it also supplies energy from its solar panels.

Given the nation’s housing shortage and the global climate crisis, affordable, net-zero housing sounds appealing. But how likely is it to gain wide popularity? Kim Vermeer, founder of Urban Habitat Initiatives, is a green building and sustainability consultant.

“You don’t necessarily save money by reducing carbon,” she said.

Affordable housing actually uses green building practices more than market-rate housing does, according to Vermeer. In part, she explained, that’s because developers recognize they can reduce long-term operating costs by making the buildings energy-efficient. But reducing carbon emissions can sometimes come at a cost.

“There is something of a disconnect, especially when the push to decarbonize pushes us to electrify,” Vermeer said.

Replacing natural gas systems with electric ones — like heating and hot water — can help reduce greenhouse gas emissions. But in a lot of places, electricity costs more than natural gas.

“The last thing we want to do is burden affordable housing developers and owners and tenants with utility costs that they can’t afford,” said Lauren Baumann, the vice president of New Ecology, a nonprofit focused on sustainable development in low-income communities.

Ideally, she explained, adding renewable energy, like solar, can compensate for those higher costs. But sometimes that’s not an option, either because developers don’t have the money or the site doesn’t get enough sunlight.

Still, even without renewables, energy-efficient homes can save money, Baumann said. And they can help people adapt to climate change. That’s especially important for low-income communities.

“There’s been a lot of research that’s been done to show low-income populations just don’t have as many options when it comes to dealing with these severe weather impacts,” she said. “And so having the ability for their housing to stay habitable in the face of some of this extreme weather and climate challenge is also a really important piece.”

Back in Telluride, Mayor Young said she hopes other communities can look to Sunnyside as inspiration for their own projects.

“We want to all work together to not have to reinvent the wheel,” Young said. “If we have a project that works, if we have an idea that works, we want other people to be able to replicate it.”

Sunnyside is set to open by summer. Just in time for sunny skies. 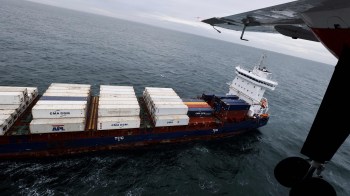