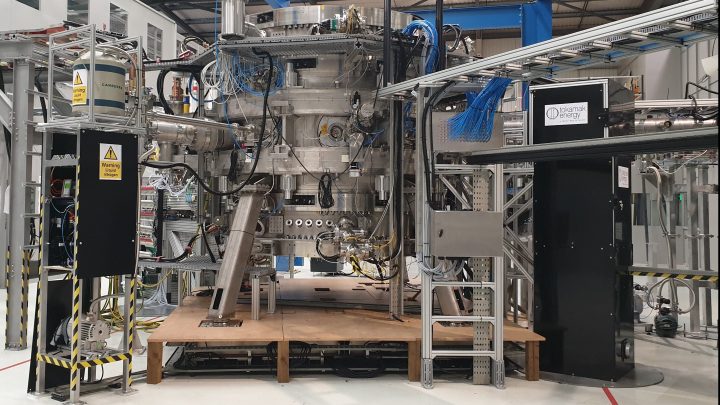 A gray, anonymous-looking building on an industrial estate south of the English city of Oxford seems an understated setting for this story. For this is where a group of technicians has been creating some of the hottest temperatures on planet Earth in the quest for an unlimited, carbon-free, relatively inexpensive and utterly transformative source of energy.

Tokamak Energy is one of dozens of research projects around the world that are working on nuclear fusion, a technology that involves fusing rather than splitting atoms, as with nuclear fission. Harnessing the power of the sun is how Tokamak CEO Chris Kelsall described the process, for this is precisely how stars create energy.

“The light that we see coming into our house every day, the starlight that we see at night, the light reflected from the moon — that’s all from fusion reactions out in the universe,” Kelsall said.

Research into fusion has been going on for decades, but the need to mitigate climate change by switching to carbon-free energy sources has brought new urgency to the work. It is now a momentous effort.

“This is the final frontier, the endgame solution — for all time, for humankind,“ Kelsall said. “We are producing a reliable, safe, clean source of decarbonized energy. It’s going to be such an exciting journey that in fact has no limits.”

The journey sounds dangerous, though. The technology at work in his company’s Oxfordshire plant seems, on the face of it, pretty fearsome.

The approach is called magnetic confinement and involves a large, cylindrical machine containing powerful magnets. The machine or reactor is known as a tokamak, a Russian acronym that stands for “toroidal chamber with magnetic coils.” Inside this device, hydrogen atoms are forced to fuse at incredibly high temperatures.

That would be the equivalent of 212 million degrees Fahrenheit. A scary number, but Dunbar insisted that the device is perfectly safe.

Unlike with nuclear fission, the radiation emitted by this process dissipates in about 20 minutes, so there is no problem with nuclear waste. And there’s no potentially uncontrollable chain reaction.

“If there’s any disturbance in the magnetic field, the plasma collapses safely. There is no possibility of meltdown. It’s inherently safe,” Dunbar said.

It’s also potentially inexpensive since the fuel — hydrogen — is the 10th most abundant element on Earth and the fusion process releases four times as much energy as fission.

“We’re seeking to develop fusion power plants for deployment in the late 2030s and early 2040s,” he said.

But enormous technical challenges have yet to be overcome. Fusion research projects have been going on for more than half a century and so far they’ve all generated less energy than it took to cause the fusion in the first place.

This technology does not enjoy universal acceptance and support.

Steve Thomas, a retired professor of energy policy from Greenwich University, is a fusion skeptic.

“The breakthrough has always been just over the horizon, and that’s where it still seems to be,” Thomas said.

The mantra has always been the same, he said: “In another 10 years or so, we’ll have a commercial device.”

“Maybe that will be the case this time around,” Thomas added. “But I’m skeptical after so many broken promises over the past 50 or so years.”

Fusion supporters, however, point to recent developments in the United States, where late last year the Massachusetts Institute of Technology announced that it had created the world’s most powerful magnetic field of its type, and that this paved the way to completing the world’s first commercial fusion demonstrator device by 2025.

At Tokamak Energy, CEO Kelsall also stressed that private investors are voting with their dollars. They have poured more than $160 million into his company and almost $2 billion into MIT’s spinoff company — Commonwealth Fusion Systems.

“Investors are realizing that fusion needs to be looked at. It needs to be investigated, and if they don’t have a seat at the table, there’s a very real risk that they’re going to miss out on the next Google,” he said.

An international race is underway to crack the fusion conundrum and become that “energy Google.” While Kelsall conceded that “there are some excellent peer companies in the U.S. with very strong funding,” he said that Tokamak Energy’s reactor can offer a competitive alternative.

He clearly believes this is a race that he and his team in Oxfordshire can win.