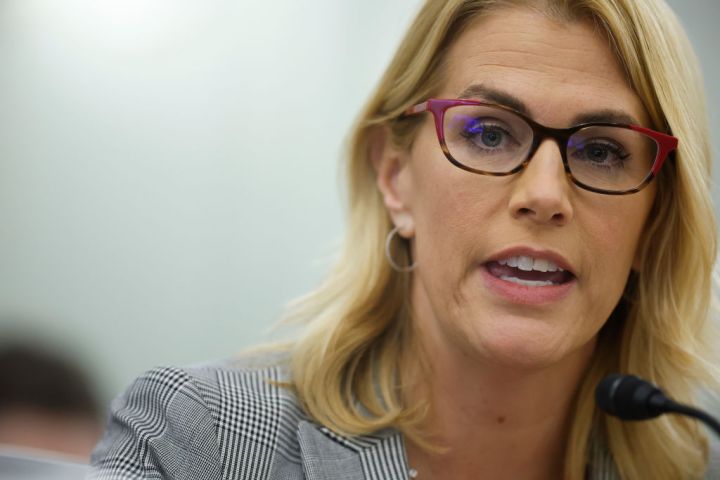 COPY
Association of Flight Attendants-CWA International President Sara Nelson testifies before the Senate Commerce, Science, and Transportation Committe in the Russell Senate Office Building on Capitol Hill on Dec. 15, 2021 in Washington, DC. The air transportation executives testified about the current state of the U.S. airline industry during the oversight hearing. Chip Somodevilla/Getty Images

The holiday travel season, almost behind us, has been marked by frequent flight cancellations. While bad weather played a part, pandemic-related staff shortages were another common culprit.

Flight attendants play a critical role on every flight, especially during COVID-19. They make sure masks stay up and that social distancing is maintained where possible. To hear more on what flight attendants are up against right now, and how that factors into the larger labor movement, Andy Uhler spoke with Sara Nelson, international president of the Association of Flight Attendants-CWA, a union that’s part of the AFL-CIO.

Nelson herself is a 25-year veteran flight attendant, and now represents 50,000 flight attendants across 17 airlines. Below is an edited transcript of their conversation.

Andy Uhler: In terms of current flight conditions and the workplace more generally, I’m curious what you’re hearing from your members. How are things going?

Sara Nelson: Well, here’s what I know. Flight attendants have been on the front lines of this pandemic for two years now. They’re worn out. And over the past year, we’ve had full planes with combative passengers, sometimes violence, and constant bickering over the safety regulations that we’re trying to enforce to keep everyone safe. I testified before Congress three times in the last three months, saying that flight attendants are saying ‘Make it stop.’ What it has done is it has caused people to take pause on picking up additional time. And even before this holiday we were seeing shortages in staffing, not because we had fewer flight attendants. In fact, there are more flight attendants now than there were pre-pandemic compared with flight hours that the airlines are operating. The difference is that pre-pandemic, people were regularly picking up voluntary overtime. And that is just not happening now for two different reasons. One, they’re very concerned about coming to work. And then people are getting sick. And they’re using that sick leave.

Uhler: Does it just vary from airline to airline in terms of attendants having the power to decline working on a flight because they feel unsafe or because they’re, like you said, feeling sick? I mean, what sort of options do your members have?

Nelson: What we negotiated with the airlines is to not move forward with any disciplinary process because people are calling out sick during this time, which is very important, so that that’s not a deterrent for people to actually use that when they’re sick and keep everyone else safe. And also, to cover that sick time. So that was not coming out of their personal bank. And then also when we had the schedule meltdowns, when the airlines were planning based on pre-pandemic overtime hours and we saw some of those meltdowns in the late summer and early fall, that did give us some bargaining power. And we negotiated incentives for over this holiday. So, some flight attendants are making 300% of this holiday. But I have to tell you, you know, there’s only so far that you can stretch people. And you can provide those incentives, but they’re really worn out.

Uhler: You talked about testifying before Congress, asking for better pay, for safer standards. Have you gotten what you need?

Nelson: I do want to lift up FAA administrator Steve Dickson here, who put in place a zero-tolerance policy to any disruptive behavior. He’s also been working with the TSA and pulling all of the airports in the airlines together to put in place good communications, and we have had improvements. So, all of that has been helpful. Where the lawmakers could help is working on the issue of a banned passenger list and having the government coordinate that between the airlines, because if someone is acting out somewhere they should lose the freedom of flight, at least for a period of time. And there needs to be a due process with that. So, it needs to be carefully considered. But this is another deterrent that we have in our hands that we should be using.

Uhler: Should there be a vaccine mandate for passengers?

Nelson: Look, we support this, at least in theory, because we have got to get everyone vaccinated. We are practical about it, though, because in this country we have not done a good job of tracking vaccination. And so, implementing this in the operation and making sure that it wouldn’t just fall to the onus of the airlines who are ill-equipped to deal with it, or to the frontline workers who are there. But [ensuring] that it is in coordination with government, and we have a seamless way to check that vaccination status, then it could work.

Uhler: So, this past year, we’ve seen several high-profile labor organization movements, I’m thinking Amazon, and then then we had strikes at John Deere and places like that. Has this momentum created changes within your group, within the AFA?

Nelson: So yes, listen, it’s in the water everywhere. Workers are sick and tired of having to work more than one job to survive, not being able to have proper health care, not being able to have a secure retirement and, frankly, being saddled with things like student loan debt, as well. Everyone is really understanding, on the other side of this pandemic, that workers were also treated as disposable. And they’re understanding that it doesn’t matter what industry you’re in, we’re all facing the same sort of issues. You know, I used to think that I’m just not working hard enough. But now I hear the stories of all these other people. And so, I’m not going to allow that poverty shaming to keep me down. And that kind of commonality and demands from the working class and understanding that we can only make it better if we all stand together, and these next generations understanding that there was no golden path laid out for them, they’re going to have to figure out how to make this work. And that has created some cohesive collective action as well.

Uhler: I’m curious, too: Are there things that we passengers, we folks who get on planes, don’t recognize about y’all’s job, about things that you’re either asking Congress for or just negotiating with carriers, with other entities, that you guys need?

Nelson: Well, first and foremost, before the pandemic, I think it’s really important for passengers to know that we’re their greatest advocates because their travel space is our workspace. So clean air, stopping the spraying of pesticides, having FDA approval over the food that served on board and EPA oversight with the water. These are all things that our union has fought for. We fought to get smoking off the planes. In terms of right now, the vast majority of people who come to the door of our airplane just want a safe, uneventful flight. And so, you know, look to the flight attendants, look to the pilots, because we are your greatest advocates, and we’re going to make sure that conditions are such that we’re all going to reach our destination safely.

Note: We reached out to the Federal Aviation Administration for a response to claims of airline staffing shortages. An FAA representative said, “The FAA has provided full air traffic services throughout the holiday.”