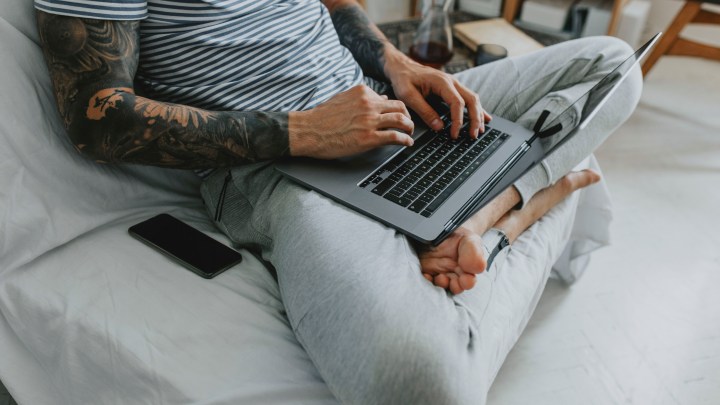 COPY
In his experiments, social psychologist Adam Galinsky found that while “traditional work clothing” made some remote workers feel more powerful, “home clothing” made them feel authentic and more engaged in their work. FreshSplash via Getty Images
Workplace Culture

In his experiments, social psychologist Adam Galinsky found that while “traditional work clothing” made some remote workers feel more powerful, “home clothing” made them feel authentic and more engaged in their work. FreshSplash via Getty Images
Listen Now

For many of the millions of workers who went remote during the pandemic, the idea of “return to the office” has turned into a kind of cruel joke — delayed by delta, now by omicron — and who knows what comes next.

Now, what seemed like a temporary work uniform is looking like a permanent change: Worklife and the sweatpants life are one and the same.

There has been some resistance. Back in the early days of the pandemic — the second week of April 2020, to be exact — a bold headline from the Los Angeles Times made millions of remote workers sit up on their sofas: “Enough with the WFH sweatpants. Dress like the adult you’re getting paid to be.“

Recently I caught up with Adam Tschorn, the features writer at the Times responsible for that column, in which he admonished wearers of cozy athleisure to grow up and show some respect by constraining their bodies with cold, hard pants — and buttons. The internet got very mad.

“What I should have done is frame it as this is what works for me,” Tschorn said. “I don’t think I read the room quite right.”

As we struggle through the trauma of a century, why would we possibly care about maintaining business casual? I was #TeamSweatpantsForLife.

But now, nearly two years later, I’m starting to wonder if he had a point. Sweatpants still feel comfortable. But there are other ways I used to feel, in those old days of dressing for work that I have to admit I kind of miss.

“I think what this has made us realize is — who are we dressing for? And it’s clear now we’re dressing for ourselves,” Tschorn said. “How does what you wear make you feel?”

It turns out what we wear can have a big effect on how we feel.

“You’re physically wearing the clothes so you can feel that tactile experience and be the symbolic associations you have with those clothes,” said Adam Galinsky, a social psychologist at Columbia Business School who researches what he’s coined “enclothed cognition,” or how what we wear affects how we think.

In 2012, Galinsky and a co-author found that people who wore a white coat, described as a scientist’s coat, performed better on cognitive tests than people who didn’t wear the coat or were told it was a painter’s smock.

“It doesn’t just affect other people’s impressions of us, it also affects our own sort of psychological orientations and processes,” Galinsky said.

Previous research has found that wearing suits, for example, is associated with improvements in abstract thinking and greater success in negotiating. So does wearing the uniform of a sleeping person affect our ability to function like awake ones?

During the pandemic, Galinsky conducted a number of experiments with remote workers and found that though “traditional work clothing” made some people feel more powerful, what he calls “home clothing” made them feel authentic, which made them more engaged in their work.

It’s a concept he calls “enclothed harmony” — people felt better wearing clothing that’s in tune with the environmental context, the home, rather than the content of the activity, work.

Samuel Chu has found this to be the case. He’s a community organizer in Los Angeles who works with nongovernmental organizations on human rights campaigns.

“I literally just have lived in my activewear for the last two years,” he said. Well, except for the times he has to give remote testimony to Congress and stuff.

“I do put on a shirt and a jacket. But only the top,” Chu said. “I testify, and the moment that the Zoom ends, I literally rip off like Superman and back to my sweatpants.”

To Chu, sweats are symbolic of how the pandemic has blurred the distinction between our home and our work lives.

“I feel like now we’re kind of in a place of no return,” he said. “Now I feel like there’s just no rules.”

But without the compelled routine of office clothing, workdays can too easily merge into nights — time and to-do lists stretching like so much flexible knitwear.

“I feel like what you’re hinting at is boundaries,” said Jill Duffy, author of the forthcoming book, “The Everything Guide to Remote Work.” Duffy has tried it all — dressing up and dressing down — and said both have their merits.

“There are lots of things we do to ritualize the beginning of the day and the end of the day, and it doesn’t have to be about getting dressed or taking a shower or putting on makeup,” she said.

For her, that means having one designated work chair or a lamp she turns on and off at specific times and headphones she puts on to focus.

For Adam Tschorn at the LA Times, it means putting on a collared shirt, Levi’s and sneakers … but that’s just him.

“It’ll be on my tombstone, I’m sure of it: ‘The sweatpants guy,'” Tschorn said. “If I knew then what I know now, I’d say, ‘Good God, wear whatever you want, we need to get through this.'”

Me? I’m considering investing in some clothes I don’t also want to sleep in.