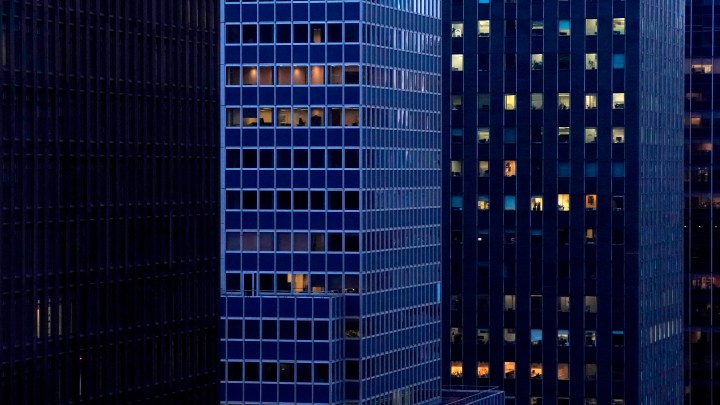 COPY
Some companies have delayed their planned returns to the office, and more may follow. Timothy A. Clary/AFP via Getty Images
COVID-19

Some companies have delayed their planned returns to the office, and more may follow. Timothy A. Clary/AFP via Getty Images
Listen Now

In a lot of places, workers have been trickling back into their offices since the beginning of summer, a handful of hybrid employees at a time.

In New York, for instance, the occupancy rate for commercial office space in the second quarter was double that of quarter one.

Downtowns were starting to feel a little like … downtowns. And then the delta variant arrived.

Google, Lyft, Indeed and Apple are just some of the companies that have pushed back their back-to-the-office plans.

Twitter reopened for two weeks, then shut down again.

All of those companies, of course, and thousands of others making similar decisions are surrounded by businesses that depend on people actually coming to work in person.

Real estate lawyer Steve MacDonald has been in the Flood Building near downtown San Francisco for 30 years. He loves his suite of offices there.

“I’m attached to the place because I designed it. I’ve got the fancy tapestries and fireplaces and stuff like that,” MacDonald said.

That is why at a meeting Thursday, his law partners approached him very delicately.

“And they were kind of sensitively asking me, ‘How do you feel about giving up the whole place?'” he said.

When Marketplace spoke to MacDonald a few months ago, he was still trying to sublet his extra office space.

“It’s gotten much less likely that we’ll return to 2019 normalcy,” he said.

Lori Albert is worried about that too. She studies the New York market for the commercial real estate company Cushman & Wakefield.

“I hope that it doesn’t go back to what it was a year ago. Things were progressing, and momentum was building, and hopefully that will continue to be the theme,” she said.

They manage Coffee Cultures, just a block from Twitter’s San Francisco headquarters. The company may expand its food menu to lure more local residents, but Howell said those Twitter employees “have the money to spend on their daily cup of coffee and pastry, so our business will do a lot better with that help.”

In the meantime, Howells doesn’t have to compete with the free gourmet coffee at Twitter.