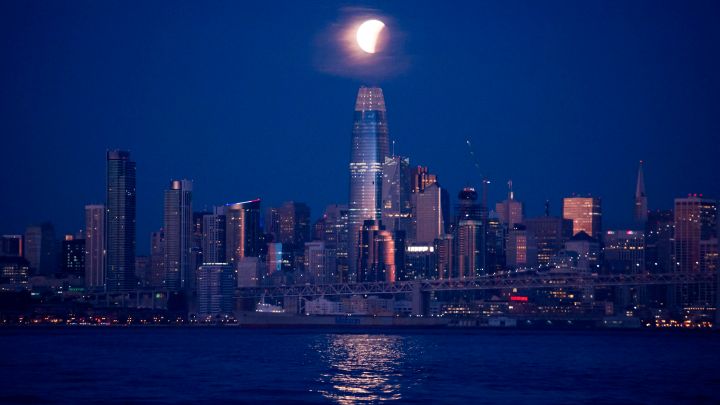 MacDonald has been practicing real estate law for 30 years, and for most of that time he’s had offices in the Flood Building, which used to be a prime location. It’s a few blocks from Union Square and the financial district, right off a Bay Area Rapid Transit subway stop.

He’s had two small offices on the sublet market since August, when it became clear his firm would be joining the post-pandemic hybrid revolution — some days at the office, some at home.

The problem is every other San Francisco lawyer or therapist or insurance agent apparently has the same idea.

“I’m not getting anything,” said MacDonald, 72. “And I just spoke to my administrator, and she just told me they dropped the ad. There were no nibbles.”

About 18% of San Francisco office space is on the market right now, roughly 14 million square feet of emptiness. Major companies synonymous with the city, from Twitter and Salesforce to Levi’s and The Gap, have all announced plans to downsize as they consider a future where remote work is more prevalent.

While demand for lower-tier properties has dropped significantly, other parts of the market are showing some signs of life.

The Salesforce Tower, the city’s tallest building and a gleaming monument to just how much property Big Tech has devoured in San Francisco over the last decade, remains highly coveted.

“If you’re a top-tier tenant, if you want to be in the best product in San Francisco, you would look to Salesforce Tower,” Sammons said.

Appetite for so-called “trophy” buildings is holding up pretty well. Nothing says “our SPAC killed it’s IPO” like a 61st floor panorama of the San Francisco Bay.

It’s the lesser buildings without a commute by gondola option that are the bigger worry.

That could be an opportunity for the next Salesforce, which right now could be just two coders working out of their proverbial garage … or Zooming from two different garages.

So far though, startups are doing more window-shopping than actual leasing. A different industry is being far more aggressive scooping up space. They’re still tech-ish, just not hoodies and jeans tech-ish.

“If you would through the lab you’d see a typical diagnostic lab, and yes there’s lab coats,” said Ken Knight, chief operating officer at Invitae, a biotech firm that does genetic testing.

Earlier this year Invitae inked a deal for a second San Francisco location. Terms of the deal aren’t public.

Biotech companies like Invitae can’t go fully remote, and that’s been a lifeline for San Francisco real estate. Three months ago, drug company Vir Biotechnologies took over a giant chunk of Dropbox’s headquarters. Not long after, the property sold for over $1 billion, a record price per square foot for San Francisco office space.

But news of the deal was still a positive sign for Carmen Chu, San Francisco’s city administrator. Not only did it mean more property taxes, the city’s biggest source of revenue, it’s also a strong signal that investors don’t think the city is going to ghost itself.

“We are a population of roughly 900,000, but during the weekdays we swell to over a million people that come in for work,” Chu said. “All those people, they’re shopping in our centers, they’re eating in our local cafes.”

Chu can rely on Steven MacDonald to contribute his fair share to city coffers — he’s not going anywhere. Nibbles or no nibbles, he’s made this place his own.

Right before the pandemic, MacDonald was putting the finishing touches on what he calls his office’s 18th-century lounge. Leather couches, a tapestry from the Hapsburg empire on one wall, an oil painting of a French aristocrat on the other.

“This is a room that, to use the vernacular, I pimped up,” MacDonald said.

MacDonald knows other San Francisco law firms going fully remote. But he thinks he has a competitive advantage staying put. The lounge is a good place to drink with your adversaries.