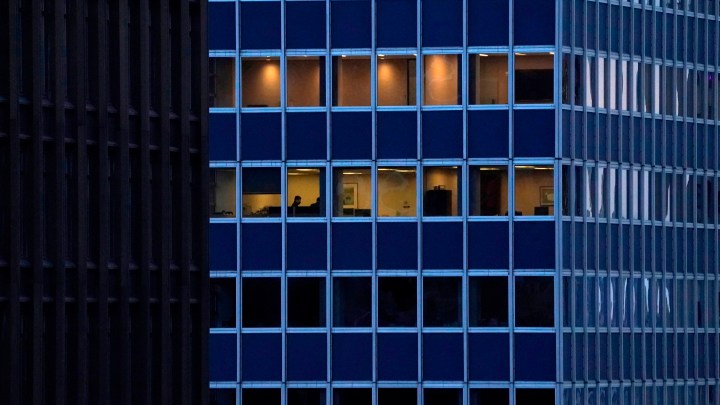 COPY
A few lights are on in a New York City high-rise. Some workers are coming back, but downtowns still have plenty of unused capacity. Timothy A. Clary/AFP via Getty Images

A few lights are on in a New York City high-rise. Some workers are coming back, but downtowns still have plenty of unused capacity. Timothy A. Clary/AFP via Getty Images
Listen Now

Deep in the October federal jobs report was a nugget about remote work — or “telework,” to use the old term still favored by the government. The share of workers staying home due to worries about COVID dropped after plateauing over the summer. It hit a pandemic low of 11.6%.

No, cities aren’t dead, as it seemed early in the pandemic, but those high-rise office towers that create their skylines aren’t too popular these days.

“No doubt about it: Downtowns are taking the brunt of this,” said Ian Anderson at commercial real estate firm CBRE. Especially in the biggest cities.

Office vacancies are up everywhere, but they’ve gone up much faster in downtowns than in the suburbs, where commutes aren’t as painful.

It’s a big turnaround from the years before the pandemic, said Ellen Dunham-Jones at Georgia Tech.

“We saw this big move of big-office folks moving back into the cities. Plus, that’s where the new younger, digital-savvy workers all wanted to live — in cities,” she said.

The pandemic reversed some of the trends toward urbanization. Families are seeking more space in the suburbs. Still, young people are returning to cities like New York and San Francisco, per Robert Sammons with Cushman & Wakefield.

“Those people renting apartments realize they’re going to have to go back into the office at least a few days a week, and they may as well be convenient for them to do so,” Sammons said.

But even if remote work brings fewer office jobs back to central business districts, that doesn’t have to spell disaster, said Richard Florida, author of “The Rise of the Creative Class.”

“You know cities used to have these giant factory complexes and warehouse complexes,” Florida said. “Some of them have been repurposed.”