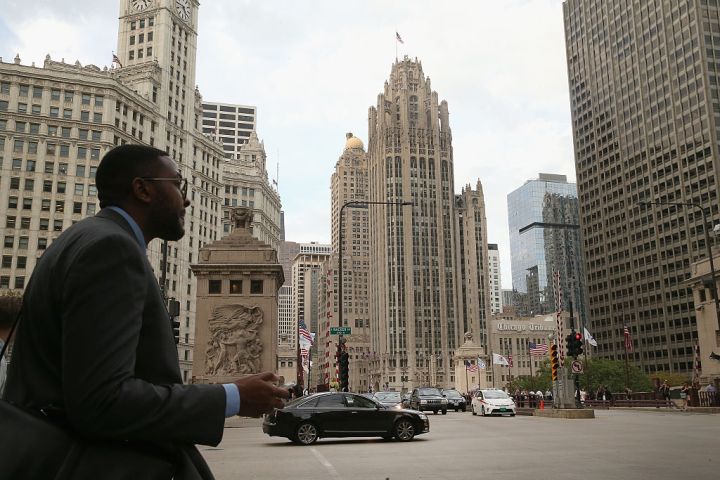 COPY
The Tribune Tower sits along Michigan Avenue at the Chicago River in Chicago, Illinois. Much of the iconic building has been converted into apartments. Photo by Scott Olson/Getty Images

The Tribune Tower sits along Michigan Avenue at the Chicago River in Chicago, Illinois. Much of the iconic building has been converted into apartments. Photo by Scott Olson/Getty Images
Listen Now

It has been a record year for apartment conversions. According to data from Rent Cafe, developers created about 20,000 new apartment units this year in buildings that used to serve some other purpose, like offices, schools, or hospitals – a process called adaptive reuse.

One example of that is the iconic Tribune Tower. The building is 36 stories of Gothic splendor in the heart of downtown Chicago.

“That’s a beautiful historic building, lots of great architectural detail,” said Strachan Forgan, an architect with the firm SCB, which just completed a conversion of the building into 162 residential units.

It’s a process drawing increasing interest as housing remains in short supply in many cities, while demand for office space is going down.

“You can take just a beautiful historic building … and give it another 200-plus year lifespan,” Forgan said.

Adapting an existing building is generally cheaper and greener than building a whole new one. But it’s not as simple as just tearing down cubicles and putting up some new walls.

“The lower floors of the building were very large, because it used to be the old printing press room,” Forgan said.

Offices are built with deeper floor plans, so they demolished some central parts of the building to let in natural light.

But the challenges of converting buildings like this go beyond aesthetics, said Nathan Wittasek with engineering firm Simpson Gumpertz and Heger.

“You end up spending lots and lots of effort, trying to make it retroactively meet contemporary requirements,” he said.

Things like fire and earthquake safety standards, accessibility … and the added plumbing and ventilation needed for all those additional bathrooms and kitchens. And that’s if the city will allow it in the first place.

“The existing zoning codes in the city made it very difficult,” said Ken Bernstein, a city planner in Los Angeles, where developers ran into a problem converting the crumbling stock of early 20th century office buildings in downtown.

“Any residential building had to have at least two parking spaces per unit,” he said.

Old office buildings don’t have that. So in 1999, the city passed an ordinance that made exceptions for these projects, helping to transform downtown into a vibrant residential neighborhood. Today, the city has plans for another 4,000 apartment conversions.