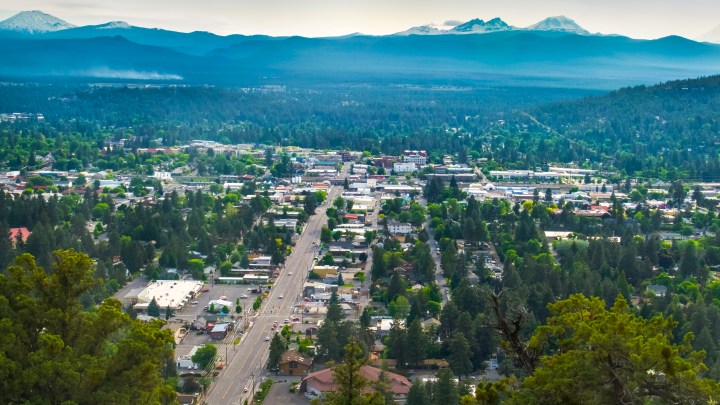 COPY
The outdoorsy and picturesque city of Bend, Oregon, is among the locales where many jobseekers have been searching for remote gigs, according to LinkedIn. JamesBrey via Getty Images
COVID-19

The outdoorsy and picturesque city of Bend, Oregon, is among the locales where many jobseekers have been searching for remote gigs, according to LinkedIn. JamesBrey via Getty Images
Listen Now

The pandemic has brought a significant rise in remote work — whether that’s temporary or is more lasting remains to be seen.

As the remote work habit settles in, some people are deciding that this is an opportune moment to relocate, especially from big, high-priced cities. Instead, they’re opting for smaller cities or rural areas that are more conducive to their lifestyle or more affordable for their cost of living.

Among the most popular destinations for moves, according to research by the business social media network LinkedIn, are a cluster of small cities where roughly 35% to 40% of job seekers on the site are routinely searching for remote jobs.

From 2009 until August of this year, Jill and Chip Conrad, 41 and 46 respectively, were living and raising their two kids in Salem, Oregon — where Jill grew up and still has family.

Salem is a small city on the Interstate Highway 5 corridor. It’s south of Portland in the Willamette Valley, a region of rich farmland sandwiched between two mountain ranges, where it’s often cloudy and wet in fall, winter and spring.

“What prompted the move ultimately was Chip was really looking for more sunshine, and the Valley had a lot of rain and gloom,” Jill said. “And the pandemic, of course, opened that window for us.”

At the end of the summer, the family moved three hours across the Cascade Mountains to Bend, which is on the sunny, dry side of the state.

The city of 93,000 features the mountain-fed Deschutes River rushing through its downtown past parks and walking trails. There is world-class skiing, climbing, rafting, fishing and hiking in every direction.

Chip said he got what he wanted with the move.

“I love it. People here don’t ask you if you like to go outside, they say, ‘What kind of mountain bike do you own?’”

The move was possible, Jill said, because she can now do her job from pretty much anywhere.

“I’m a licensed marriage and family therapist, and since the pandemic, I’ve been working remotely doing telehealth with my clients,” she said. “I think insurance companies are on board to continue paying for services. We’re doing good work, and it’s convenient for people.”

Chip worked as a high school business teacher in Salem. He used the move to Bend as an opportunity to change careers; he now manages a team that customizes camper vans at a local business.

The Conrads’ story of transition is mirrored in a lot of LinkedIn profiles these days, according to Karin Kimbrough, the social network’s chief economist. Kimbrough said that job switching is up 50% this year and self-reported “burnout” among members is up 12%.

“They’re looking for something better, for something different after being a little bit stuck in place during the pandemic,” she said. “People are changing jobs for more money, more opportunity, a better commute or no commute.”

There’s been a sharp rise in people looking for remote work on LinkedIn and job postings offering it, Kimbrough added, with about 1.4% of postings — roughly 1 in 67 — doing so before the pandemic to more than 14% — or about 1 in 7 — now.

Kimbrough finds evidence that people are relocating for remote work in members’ posts on the site.

“People share with us that they’ve moved. And we do definitely see that some of the top cities for remote work are some of these smaller, very lovely towns with great quality of life, but may not have as much industry and business activity. And so people are living there but able to connect with business that’s somewhere else across the country.”

That fits Bend “to a T,” according to Damon Runberg, regional economist for Central Oregon at the state employment department. For the better part of a decade, Runberg said, Bend has been a magnet for “lifestyle migrants,” with relatively high earnings to match: “Professional and technical services, consultants, engineers — anyone who can do their work or access their clients online or through travel.”

But while remote-work destination cities like Bend might be great places to live, they’re also getting more expensive to move to and make ends meet in.

The Conrads experienced this first-hand as they prepared for their move from Salem, a city with relatively moderate housing prices, and tried to buy in Bend’s torrid market.

The Conrads finally landed a new four-bedroom house in a tract development on the outskirts of town. They bought it sight unseen, just to get in the door, for $630,000.

On the other hand, “the average annual wage is about 12% below the statewide average. That is a huge discrepancy between costs and what local wages pay. And so how does someone make that work here locally?” Runberg said.

Well, you could get lucky and land one of the relatively scarce high-paying local professional jobs. Or you could work multiple jobs.

“Or you get one of these remote jobs that can pay San Francisco wages, Seattle wages,” Runberg said.

He added that the continued influx of new residents through the pandemic puts upward pressure on housing costs, while also juicing consumer spending and tax collections.

“One side is definitely the, ‘Ugh, they’ve found our secret,’ you know. ‘Stay out of here,’” he said. “But then the other side is like, ‘The more the merrier, it’s great for the economy.’”

Correction (Dec. 16, 2021): Previous versions of this story mischaracterized job postings data from LinkedIn. The text has been corrected. 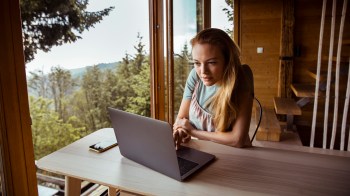 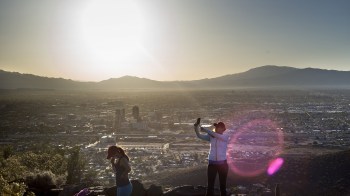