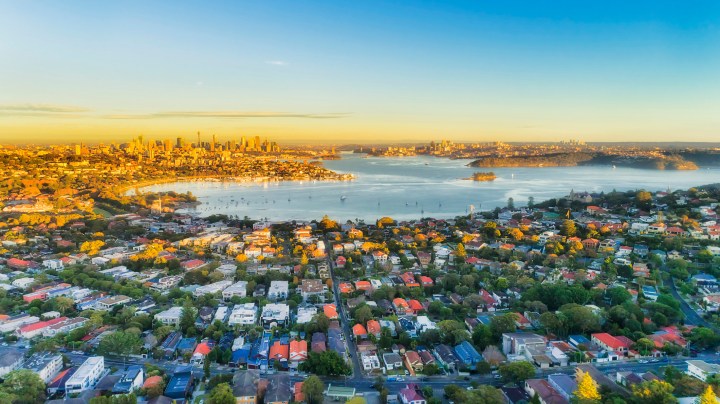 COPY
Prices are rising at breakneck speed in places like Sydney's eastern suburbs, spurred by a housing shortage and low interest rates. Zetter via Getty Images

Bankers in Australia are concerned about a recent explosion in house prices relative to incomes. In some parts of big cities like Melbourne and Sydney, prices are going up so quickly that even relatively high earners can’t save fast enough.

The affordability crisis is getting to the point that, in some places, young Australians are faced with a stark choice: move hundreds or thousands of miles away to buy something they can afford or give in to a life of increasingly expensive rents.

Alison from Sydney chose the former. She’s in her early 30s, and she and her partner recently became first-time homeowners. They purchased a little fixer-upper — in central Japan.

Alison works as a teacher at a local university and was already living in Japan when COVID struck. Faced with the prospect of not being able to return to Australia for some time — and coupled with property prices back home — she decided to make her stay in Japan permanent.

“The price of a Japanese property is the price of a car in Australia,” she said. “The real painful element of this story is that my parents know that my siblings and I won’t ever be able to afford to live in a house near them. And even honestly, to just afford rent in those post codes is becoming further and further away from a reality.”

In some ways, this is an old story. Australian house prices have taken off in the last 10 or 15 years. But since the beginning of the pandemic, things have intensified dramatically.

Mike Wood, editor of the country’s leading mortgage news site, Australian Broker, said a combination of factors is at work.

“There’s very low interest rates — historically low — which means that people can get loans very easily. There has been pent-up demand, which has come from people obviously not spending money during the pandemic,” he said. “Then you also have a complete chronic lack of supply, especially in cities like Sydney and Melbourne.”

As a result, a problem confronts many who grew up in Australia’s big cities. Even if they can save something for a deposit, they just can’t save fast enough to keep up with prices.

That’s the case for Susan. Like Alison, she is in her 30s and was raised in Sydney. By her own estimate, her income is above the national average. But she and her partner are seriously considering moving to Adelaide — an Australian city 800 miles from where she grew up — simply because they can’t afford to buy a house in her hometown.

“It just feels as though you’re kind of fighting a losing battle,” she said. “Then, you do kind of have a look at what you would be able to afford to purchase in other cities.” That’s what led them to look at Adelaide, she explained.

Her partner lived there for a time, so there’s a bit of a connection, but not much. “My family are all in Sydney. So it’s a really difficult decision.”

Will the government do anything to help people like Susan? Saul Eslake, the founder of Corinna Economic Advisory, said it’s reluctant to act because its voter base includes millions of older Australians who are homeowners.

“Governments of the state and local level have made it increasingly difficult to redevelop existing housing in urban areas at higher densities in order to avoid offending neighbors,” he said. “This is often referred to as NIMBY policies: ‘not in my backyard.’”

At the very least, the government needs to cease policies that are actively making things worse, he said. “We have dug ourselves into a hole in terms of housing affordability and homeownership, and a profound piece of wisdom is that when you’re in a hole, the first thing to do is to stop digging.“

Even that seems unlikely in the near future, however. At the moment, serious housing reform is absent from the platforms of both of Australia’s major political parties. So, for the time being, Australia may have some digging yet to do.