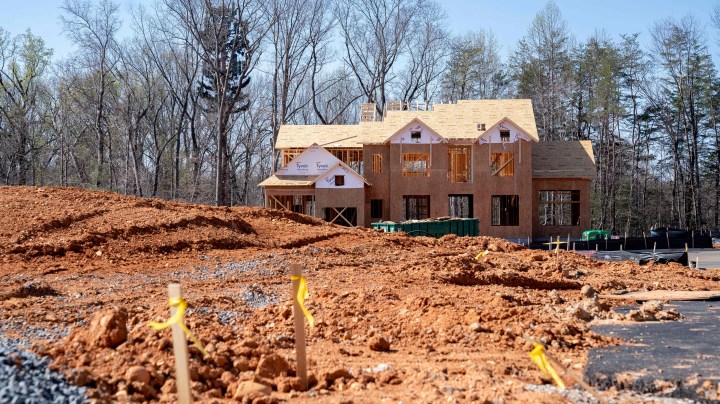 COPY
Fewer homes are being built these days — especially in the price range of first-time buyers. Stefani Reynolds/AFP via Getty Images

Fewer homes are being built these days — especially in the price range of first-time buyers. Stefani Reynolds/AFP via Getty Images
Listen Now

Construction of new homes fell 2% in June from a month earlier to the lowest level in nine months. The number of new building permits also fell. Confidence among homebuilders is way down.

There have been lots of signs lately that the housing market is cooling. But that doesn’t mean housing is any more affordable.

It is rough out there if you want to buy a house, especially for the first time. “It’s the most unaffordable it’s ever been,” said David Dworkin at the National Housing Conference.

That’s because prices are at record highs, and mortgage rates are much higher than they were six months ago, he said. There are also just fewer homes being built these days, Dworkin added — especially in that price range.

“We’ve also seen, since the beginning of the pandemic, a huge decrease in the number of new homes being built that are less than $300,000,” he said.

Construction of all new homes fell way off more than a decade ago, during the Great Recession, and we’ve never made up that deficit.

“And we are now literally paying the price,” said Buzz Roberts with the National Association of Affordable Housing Lenders. “This is really hurting people very broadly.”

That applies to both buyers and renters, he added. About half of Americans say housing affordability in their community is a major problem, according to Pew Research.

“All housing is on a continuum,” said Diane Yentel at the National Low Income Housing Coalition. When it becomes too expensive for people to buy, they rent for longer periods — which increases competition and drives up rents for everyone, she said.

“On its best day, the housing market is like a game of musical chairs. And when the music stops, it’s always the people with the lowest incomes or no income left standing.”

In other words: homeless. These days, Yentel added, that’s happening to a growing number of people.