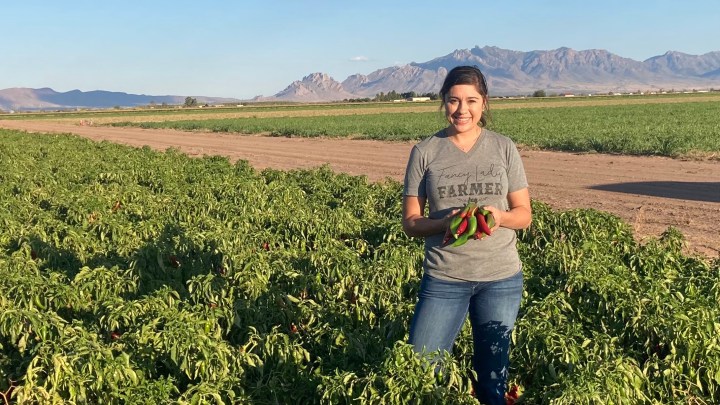 COPY
Jamie Viramontes' farm has cut chile production in favor of less labor-intensive crops. “The hardest part is that it is a tradition and it's a heritage, and this is a unique crop that we’re able to grow in New Mexico,” Viramontes said. Savannah Maher

Jamie Viramontes' farm has cut chile production in favor of less labor-intensive crops. “The hardest part is that it is a tradition and it's a heritage, and this is a unique crop that we’re able to grow in New Mexico,” Viramontes said. Savannah Maher
Listen Now

Even in October, with the harvest season winding down, the small town of Hatch, New Mexico, offers an expansive array of ways to enjoy chiles. You can buy chiles fresh at the farm stands, flame roasted from a dozen street vendors along the main drag, strung up in a decorative ristra and even in your milkshake at one local diner.

At another restaurant, the Pepper Pot, chiles are all over the menu.

“There’s nothing you can eat without chile,” said owner Melva Aguirre. “Breakfast, lunch and dinner, you’ve gotta have chile.”

During a quiet hour after breakfast, Aguirre and her kitchen crew — her son and niece — got organized for the lunch rush. She was processing a 40-pound sack of roasted green chiles from a local grower.

“I’m gonna separate the big chile from the itty-bitty ones,” Aguirre said while removing most of the charred skin from each chile. “The big chile, I’m gonna use it to make rellenos.”

For the uninitiated, that’s a chile that gets stuffed with cheese, battered and pan-fried — a New Mexico staple and one of the Pepper Pot’s most popular offerings.

“And the little ones, what I do with them, I chop them up to make the green chile sauce. That’s the one we use to make the enchiladas and to smother the burritos,” she said.

Aguirre opened the Pepper Pot with her sisters 26 years ago. Before that, she worked as a cook in other restaurants around town. And before that, she and her family worked as harvesters in the chile fields. Now, outside of the late-summer tourism season, chile growers make up most of her clientele.

“I can’t even see myself doing anything else,” Aguirre said. “It’s just a way of life.”

But that way of life is getting less dependable. Twenty years ago, Aguirre said, the farmers who eat at her restaurant were growing nothing but chiles.

“Now the farmers are growing different crops. They don’t want to depend on the chile,” she said. “Now they’re growing a lot of pecans, watermelons, Halloween pumpkins and hay. So, if it doesn’t go good with the chile, they’ve still got the other crops to survive on.”

According to the New Mexico Chile Association, annual production of the state’s signature crop is down 75% from its peak, from 34,000 acres in the early ’90s to just about 8,000 in recent years.

One challenge is attracting workers to pick the chiles, which must be harvested by hand. Jamie Viramontes explained why as she worked on her family’s farm in Deming, New Mexico, about 40 miles west of Hatch.

“Each chile matures at a different rate,” Viramontes said as she picked a long, green chile off a plant. Other chiles on the plant were shorter and not yet ready for harvesting.

Researchers are working to develop a mechanical harvester that could discern the difference and wouldn’t bruise the crop’s delicate skin. For now, the crops require a lot of human labor.

For the last several years, Viramontes said, chile pickers have been in short supply. The pandemic labor shortage that has plagued many industries has made things worse.

New Mexico law requires that agricultural workers be paid the statewide minimum wage of $10.50 an hour, and the New Mexico Chile Association reported that the average hourly picker’s wage is $15 an hour. On her farm, Viramontes said, pickers are paid by the barrel and can make as much as $18 to $20 an hour.

This year, New Mexico Gov. Michelle Lujan Grisham directed $5 million of the state’s CARES Act funds toward a labor incentive program for the chile industry, allowing growers and processors to enhance wages to $19.50 an hour during the 2021 season. But according to the state Department of Agriculture, only 16 businesses took advantage. Many of those that didn’t participate cited fears that workers would demand the same elevated wage after the program came to an end.

On Viramontes Farm, the shortage of workers resulted in wasted product. Viramontes said her farm has a contract to sell green chiles to a processor, but once the chiles mature on the plant and turn red, she’s on her own. And there’s a smaller market for red chiles in the state.

“We’re estimating we lost at least 20% to 30% of our crop due to it turning red because we didn’t have enough labor to get into the field in a timely manner,” she said.

Over the last two seasons, Viramontes Farm cut chile production significantly in favor of less labor-intensive crops like pumpkins and watermelons. And that hurt.

“The hardest part about it is that it is a tradition and it’s a heritage, and this is a unique crop that we’re able to grow in New Mexico,” Viramontes said.

Victoria Franzoy, a fourth-generation Hatch chile grower, feels the same way. Her family was among the first to commercialize Hatch chiles in the early 1900s, and they’ve been holding strong ever since, despite another major threat to the industry.

“Chile, it just needs a lot of water,” she said.

Back when she was learning the ropes, Franzoy said, the nearby Elephant Butte Reservoir took care of that need for farmers in the Hatch Valley.

“It was almost overflowing. That was back in ’88, ’89. I mean, they were worried about it breaching, we had so much water,” Franzoy recalled.

Since then, temperatures in the Southwest have steadily risen, mountain snowpack levels have declined and the Rio Grande, which feeds the Elephant Butte Reservoir, has been in rough shape.

“You know, it’s just sad. It’s sad times that we live in to have this much of a drought,” Franzoy said.

A 20-year drought that climate scientists predict will worsen in the coming decades. Chiles are also sensitive to other impacts of climate change, like extreme heat and more erratic weather, that aren’t likely to let up in the Southwest.

Franzoy said Chile River, the farm she runs with her cousin, will adapt to these many challenges. In recent years, it’s switched to a more efficient drip irrigation system and has worked with researchers who are trying to breed hardier chile varieties.

For her family, Franzoy said letting go of chiles just isn’t an option for her family. “I don’t even want to think about that,” she said.

Neither does Melva Aguirre at the Pepper Pot. She says most of her life has revolved around chiles and the people who grow them.

“I worry about my people. What are they going to do for a living? These farmers depend on that,” Aguirre said.

So does her bottom line, and that of just about every business in Hatch.