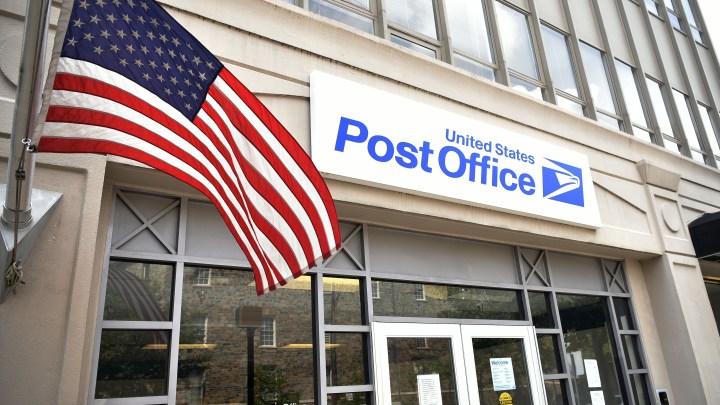 A view of a U.S. post office in Bethesda, Maryland in August 2020. Mandel Ngan/AFP via Getty Images

A view of a U.S. post office in Bethesda, Maryland in August 2020. Mandel Ngan/AFP via Getty Images

The United States Postal Service has quietly relaunched a banking program that includes check-cashing at a handful of post office locations.

The program, which began on Sep. 13 at post offices in Washington D.C., Baltimore, the Bronx, and Falls Church, Virginia, allows customers to purchase gift cards of up to $500 using their payroll or business check for a small flat fee. That could serve the one in four American households who are unbanked or underbanked, per a 2017 Federal Deposit Insurance Corporation survey.

The effort comes after increased calls from progressive politicians to offer a public banking option in the U.S. and is a collaborative effort between the USPS and the American Postal Workers Union.

“Offering new products and services that are affordable, convenient and secure aligns with the Postal Service’s Delivering for America 10-year plan to achieve financial sustainability and service excellence,” said USPS spokesperson Tatiana Roy in an emailed statement to Marketplace.

She added that “is an example of how the Postal Service is leveraging its vast retail footprint and resources to innovate.”

Though Americans may be largely unfamiliar with public banking, the offering is nothing new for the USPS.

In 1910, a Congressional act established the Postal Savings System, allowing customers — some of whom were immigrants used to banking at post offices in other countries — to deposit cash at their local post office.

“It was something that was just a normal part of the fabric of everyday American life, that you could deposit your money in the post office,” said Christopher Shaw, a historian, policy analyst and author of books on the USPS and grassroots banking movements.

Shaw said the program largely started as a result of grassroots advocacy by farmers and workers, and the banking industry was largely against the public option.

Its patronage peaked around World War II but then began to fizzle out by the 1960s, when President Lyndon B. Johnson aimed to streamline the federal government and as consumers’ Depression-era distrust of private banks began to wane. The Postal Savings Service officially ended in 1967.

A “steady drumbeat” of support

As it stands, the services provided at the four USPS pilot program locations are relatively limited, though the Washington Post reports that the program is likely to expand locations and services, like ATM access and bill-payment services.

Additionally, momentum has been growing around the idea of leveraging post offices for public banking. A 2014 white paper by the Office of the Inspector General for the USPS looked into the plan and concluded that “underserved Americans need financial services that work for them … the Postal Service is in an excellent and, in some ways, unmatched position to meet these citizens’ needs.”

Leading Democrats advocated for the issue on the presidential campaign trail in 2020.

“I think that it’s actually been a pretty steady drumbeat over the last 10 years or so of experts and inspectors general at the post office and members of Congress and pretty much everybody saying that postal banking needs to come back,” said Porter McConnell, co-founder of the Save the Post Office Coalition and Take on Wall Street campaign director.

“I think the big difference has to do with the kind of mission and purpose that such a bank would have,” Shaw said. “There are certain potential services that [private banks] aren’t interested in offering because the profitability isn’t there, so this means that there’s a whole range of individuals and locations that do not get served by these banks.”

Advocates for postal banking see it as an opportunity to serve those in banking deserts, or locations that have no access to a physical bank for deposits or withdrawals. The St. Louis Fed estimated that in 2014, some 3.74 million Americans lived in banking deserts. A 2019 survey by the FDIC found that 5.4% of Americans had neither a checking or savings account.

The problem of banking deserts only grew and was exacerbated after the Great Recession. Since 2008, more than 13,000 bank branches have closed in the U.S., according to the National Community Reinvestment Coalition. That represents more than 14% of all bank branches.

While there are more commercial bank branches in operation across the U.S., there are currently more than 34,000 post offices nationwide. That footprint is large — roughly the same number as all U.S. Starbucks, McDonald’s and Walmart locations combined — and spans unbanked areas in rural, suburban and urban settings.

“I think in terms of viable partners for a public option for banking, the post office is just, you know, a very clear option,” McConnell said.

While the new program is one aimed at investigating how the USPS can boost profits, it could also offer lower-income individuals a reprieve from companies that offer predatory payday loans or check-cashing services.

“A lot of times these places do charge a lot of money, and that’s why they are seen as exploitative,” Shaw said. “Check cashing is something where you have people paying a lot of money to do. The Postal Service’s price to do it right now is not the lowest you can find, but it’s competitive, and it’s certainly better than you can find in a lot of places. And then there’s the trust that people have in the postal service.”

But will the program get the stamp of approval?

Support for postal banking is by no means universal, however. Banking industry lobbyists, including the Consumer Bankers Association, the American Bankers Association and the National Association of Federally-Insured Credit Unions, have already come out in opposition to the small pilot program.

In order to really determine the program’s potential success, both Shaw and McConnell said an expansion of services and locations would likely be needed. But they pointed to the fact that postal banking is largely successful across the globe and expanding to banking services seems like a logical step for the USPS.

But how easy will it be to reinvent the role the post office plays for Americans? Can post offices be banks once again?

McConnell pointed to another political fight at the turn of the 20th Century involving the post office: this time, about whether the service should enter the package-delivery market. Now, a USPS without parcel service would be nearly unthinkable.

Joe Biden has previously indicated his support for postal banking; last year, a task force set up by him and Bernie Sanders advocated for a broader banking partnership between the USPS and Federal Reserve.

That gives proponents of postal banking, like McConnell, hope.

“All of the postal banking proposals that are on the table, you know, they do make it cheaper and easier for people who are unbanked or underbanked to get access to their own money,” she said.