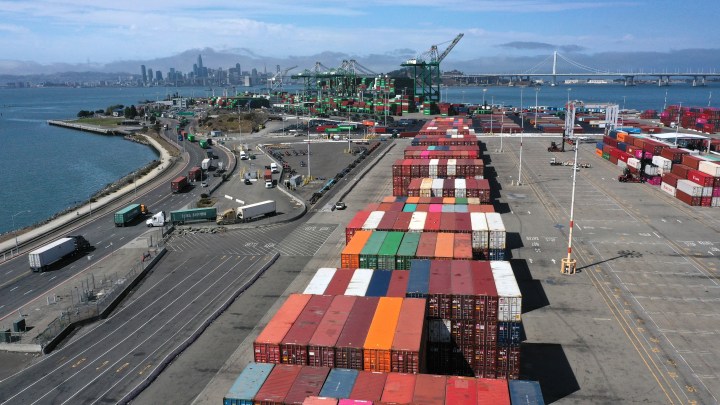 COPY
Shipping containers sit in dock at the Port of Oakland, California on Sep. 9. Justin Sullivan via Getty Images

Shipping containers sit in dock at the Port of Oakland, California on Sep. 9. Justin Sullivan via Getty Images
Listen Now

The economy is still cranking along, still growing at a decent clip — though we’re not seeing the meteoric growth experienced in the late spring and early summer, when the vaccination rate was increasing, businesses were reopening and people were starting to go out again after a year of pandemic shutdowns.

At least part of the slowdown that we’ve seen in recent months has less to do with consumers pulling back — though they have done that as the delta variant has spread — but rather with ever-increasing problems that businesses are having when it comes to supplying the goods and services that consumers want to buy.

And we got a lot more evidence of that Tuesday. Two closely watched indexes that track the movement and delivery of goods and services reported widespread supply chain disruptions.

That’s everything from shortages of raw materials, to delays in shipping of parts and finished goods, to labor shortages in service and manufacturing jobs. All of this has been leading to dwindling inventories, rising back orders and rising prices.

If, like me, you have a household appliance that’s broken right now — for my family, it’s the dishwasher — when you call for repairs, you may well hear something like this: “Due to coronavirus, demand for appliance repair has increased exponentially across the U.S. We apologize for the delays in service and excessive hold times this has caused.”

Multiply this by, basically, the whole economy, and you get a lot of friction for sellers and buyers of everything from parts to finished goods.

“In supply chains, a lack of raw materials, exacerbated by shipping constraints into U.S. ports. Alongside this, firms are reporting that they just can’t get enough staff,” said Chris Williamson at IHS Markit, which just reported a slowdown in manufacturing and services growth in September.

So, let’s see how this is playing out in one sector: autos, for example. Vancouver, Washington-based Jaaron Smith and his wife have two kids, two dogs and they’ve been in the market for a second set of wheels.

“Yeah, a new SUV,” said Smith, 39. “I’ve been working remote, of course, since the pandemic, but will be starting a new position in January and that’s going to require me to commute in, and that means we’re going to need two cars.”

Dealers tell Smith the wait on a new SUV will be several months.

The problem for automakers starts with a shortage of computer chips, according to Williamson. “If you can’t get semiconductors to make as many cars as you want, you’re going to be also buying fewer windshields, tires,” he said.

All that means less business for parts suppliers, and higher prices for new and used vehicles. Which hasn’t deterred Smith from searching far and wide for a new Dodge Durango. “It’s really hard to find one right now, on a lot, new,” he said.

So, he’s just ordered one for delivery. It’ll set him back $62,000. Plus, he’ll get one add-on he really wants: “Ventilated seats,” he said. “I’ve had them once, I never want to go without them again.”

He’s expecting it to arrive sometime in late December or early January.