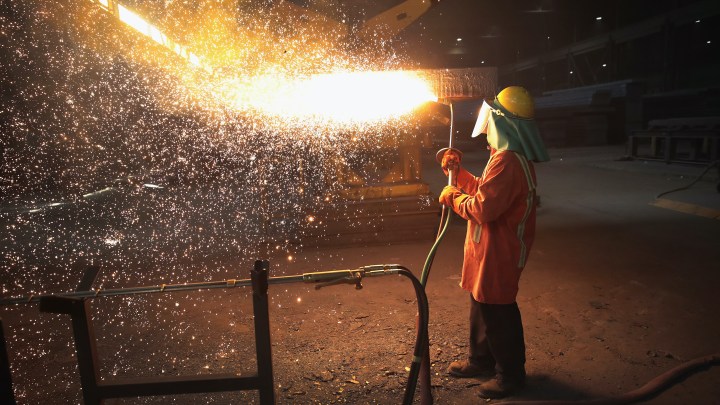 American factories were on a relative tear last month. Manufacturing has now seen nine straight months of growth, according to the Institute for Supply Management.

Output is increasing along with demand for all the stuff that manufacturers make. But the costs manufacturers are paying for raw materials are going up as well.

Manufacturers cut back production when the pandemic started, according to Scott Paul, president of the Alliance for American Manufacturing.

Paul said factories were buying up fewer raw materials, thinking that consumer demand for goods would fall off a cliff.

“And if there’s a plunge in demand, and you’ve oversupplied, that could mean a mill shutdown. And no one wants to see that,” he said.

Demand for goods did plunge in April. But over the summer, the housing market boomed. People started buying cars. Furniture. Electronics.

Timothy Fiore at the Institute for Supply Management said that wave of demand has been rippling through the supply chain.

Now, factories are scrambling to buy enough of those raw materials.

Fiore said the producers are playing catch up, and the commodities they’re making are getting more expensive.

“This is from a very significant electrical equipment manufacturer. The quote is, ‘Things are now out of control, everything is a mess, and we’re seeing wide-scale shortages,’” he said.

But this is a good problem to have, said Emily Blanchard, who follows trade policy at Dartmouth College.

She said manufacturers are betting on a stronger economy.

“They think that other firms and consumers are going to be buying more. And buying more soon. And that’s a pretty optimistic story,” she said.

Raw material costs could come down, Blanchard said, if the U.S. lowers tariffs it’s imposed on steel, aluminum and other imports.