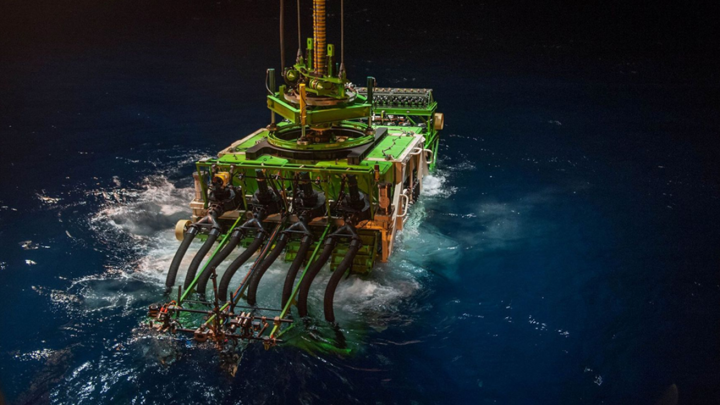 COPY
Patania II is GSR’s seabed mining robot with hoses that suck up polymetallic nodules. Here, it’s being lowered into the Pacific earlier this year so that it can roam the seabed. Courtesy of GSR

Patania II is GSR’s seabed mining robot with hoses that suck up polymetallic nodules. Here, it’s being lowered into the Pacific earlier this year so that it can roam the seabed. Courtesy of GSR
Listen Now

Electric car batteries, solar panels and wind turbines and batteries — some of the key technologies in the transition from fossil fuels to renewable energy sources — require critical metals like cobalt and nickel.

The massive metal demand on the horizon is why some mining companies are looking way out in the Pacific, in between Hawaii and Mexico, to mine the ocean floor.

Samantha Smith, a scientist at deep-sea mining company GSR, said her company is looking for something called polymetallic nodules.

“These metal-rich accretions, they look like rocks to you and me,” she said.

These nodules form over millions of years. They’re about the size of a potato and are full of cobalt, nickel, manganese and copper. The four minerals, which on land usually come from multiple mines, are all in one place here roughly 3 miles below the ocean’s surface.

“A polymetallic nodule area is, in effect, two or three land-based mines in one,” Smith said, adding that the nodules contain “the exact metals we need for a clean energy transition.”

“How that works is very much like a vacuum, where they suck up the nodules,” she said.

“First of all, and most importantly, you have to have the sponsorship of a state that is a party to the Law of the Sea convention,” said Michael Lodge, secretary-general of the International Seabed Authority, the Jamaica-based body that governs the global seabed.

The country sponsor can’t be the United States, Lodge said.

“The U.S. is one of the few countries that remains outside the Law of the Sea convention, along with countries like North Korea and Colombia,” he said.

(For its deep-sea venture, U.S. company Lockheed Martin is going through its subsidiary in the United Kingdom, as the U.K. is party to the Law of the Sea.)

Deep-sea mining is still in the exploratory stage, but robotic vacuums crawling around the ocean floor have raised environmental concerns. More than 500 scientists and marine policy experts have called for more research into potential effects on species and habitat loss, the fish we eat, and even the way the ocean sequesters carbon.

“Those are serious, unanswered questions staring at us in the face,” said Douglas McCauley, a professor of ocean science at University of California, Santa Barbara. “You may disrupt the health and functioning of that entire ecosystem.”

“You have a lot of engineers working with the scientists to find ways to design the equipment in such a way that it has the least possible impact,” Lodge said.

Proponents of deep-sea mining say that, compared to mining on land, there’s no deforestation. They point out that companies in metal-rich countries like the Democratic Republic of Congo have been accused of human rights abuses, like using child labor.

Yet Google and Volvo are among companies already saying they won’t use metals from the deep seabed, citing the need for increased research on the practice’s impact on marine ecosystems. While the potential effects of deep-sea mining are still unknown, the climate crisis is here and demand for these metals is coming.

Simon Morris, former vice president of metals at Wood Mackenzie, estimates that under even the least aggressive scenarios to reduce fossil fuels, demand for cobalt will triple by 2040.

“We fundamentally scratch our heads as to where this could come from,” Morris said.

The industry is going to have to invest at least $2 trillion over the next 20 years, Morris added, to supply the metals needed to support the energy transition.

Correction (Sept. 27, 2021): Due to an editing error, the original version of this story misspelled Michael Lodge’s last name. It has been corrected.