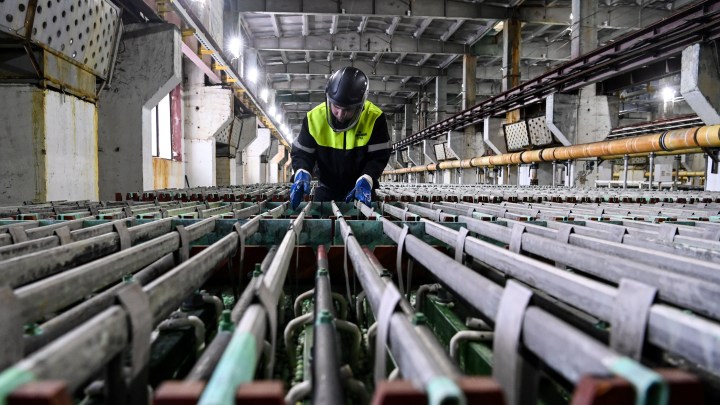 COPY
A worker at a nickel mining company in northwestern Russia. The price of nickel — used in making stainless steel, electric vehicle batteries and more — shot up this month after the Russian invasion of Ukraine. Kirill Kudryavtsev/AFP via Getty Images

A worker at a nickel mining company in northwestern Russia. The price of nickel — used in making stainless steel, electric vehicle batteries and more — shot up this month after the Russian invasion of Ukraine. Kirill Kudryavtsev/AFP via Getty Images
Listen Now

But one commodity has been more topsy-turvy than all the rest: nickel. The metal that’s used in stainless steel, electric vehicle batteries and, yes, nickels.

On Friday, March 4, it cost about $29,000 to buy a ton of nickel on the futures market of the London Metal Exchange, the primary global clearinghouse for metal commodities. By the following Tuesday, the price had reached over $100,000, leading the exchange to shut down the nickel market for a week.

In the days before nickel Armageddon, Keith Wildie heard rumors of blood in the water. Wildie trades on the London Metal Exchange for Romco Metals, a U.K.-based recycler.

“There has been lots of chatter about a short position. Someone was being squeezed,” he said.

In a “short,” an investor bets an asset will go down in price — usually a stock, but in this case nickel. A “short squeeze” occurs when other investors bet against that short by buying the asset. When a squeeze works, prices rise and the shorting investor has to buy back the underlying asset at higher prices, adding to the increase.

This squeeze worked so well that when nickel reached the $100,000 mark, the London Metal Exchange just shut trading down, fearing a market “melt-up.”

“This is an exchange that’s been around for 145 years, it’s always been the center of metals trading and all of a sudden there’s no market,” Wildie said. “There’s just no market for nickel.”

Part of the reason the London Metal Exchange stopped nickel prices from soaring even higher was that the big loser wasn’t just a rich hedge fund. It was Tsingshan Holding Group, a Chinese steel conglomerate and owner of large Indonesian nickel mines.

So in a bizarre turn of events, a nickel miner bet that nickel prices would go down … and then suffered potentially catastrophic losses when the price of the very nickel it was mining shot through the roof.

“If you’re a nickel producer, you’re helped if prices go up, but you’re hurt if prices go down,” said Craig Pirrong, who researchers commodities markets at the University of Houston. “And so what you might want to do is to protect against prices going down, you short sell.”

Oil and natural gas companies short sell to hedge risk in the energy market. Gold mining companies do it, farming companies do it. But when Tsingshan made its bet that nickel prices would drop, it didn’t factor in a Russian invasion of Ukraine.

Since Russia mines about 7% of the world’s nickel, prices shot up. Even though the value of the nickel in its mines and warehouses had jumped, Tsingshan was reportedly facing billions in short-term losses.

“There’s a cash flow mismatch when you hedge,” Pirrong said. “So when the price moves up on a day-by-day basis, you have to pay out your losses. You don’t get the benefit [of the price going up] until you actually sell the nickel.”

Fearing that brokerage houses and the clients they represent couldn’t make good on margin calls — the bill due when a short sale goes bad — the London Metal Exchange suspended trading. But more infuriating to some metals traders, the exchange retroactively canceled over $3 billion in trades that had actually gone through.

“The LME has undermined its reputation as being a neutral referee,” Pirrong said.

After a week of no trading — and no benchmark price for nickel that producers and consumers around the world could peg deals to — the LME reopened its nickel market. But it maintained caps on how high or low the commodity could go, another move to protect short positions. Nickel was back down to roughly $32,000 a ton as of Monday.

It’s important to remember that nickel has vital industrial uses. It goes into stainless steel and wind turbine blades and desalination plants and all types of stuff. It’s hard to ditch fossil fuels without nickel.

Roger Lin heads marketing at Ascend Elements, which recycles electric vehicle batteries. He said the lithium-ion battery makers he sells to are feeling the pinch.

“Volatility, in general, is not good for the long-term viability of any market. It’s just hard to plan and predict in those cases.”

EV companies could opt to go the Tesla route. It responded to rising nickel prices last year by switching some models to a less efficient battery that doesn’t use the metal.

But Tesla still had to raise prices this month. Because of the war in Ukraine, aluminum and cobalt — two other major inputs for batteries — are also shooting up in price.