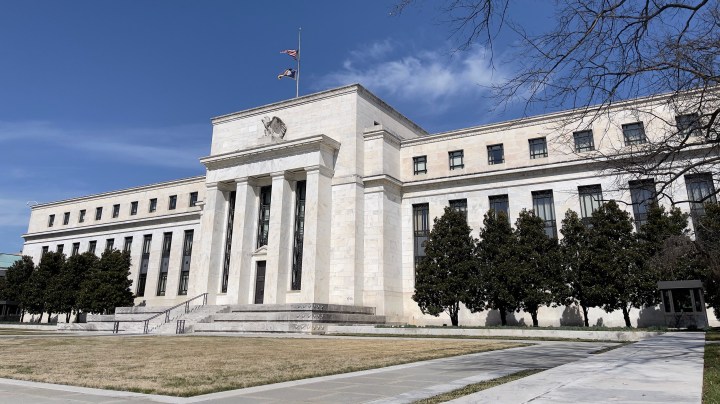 COPY
The Federal Reserve building is seen on March 2021 in Washington, D.C. The Fed's tapering of bond-buying and upping of interest rates is likely to be a slow, gradual process. Daniel Slim/AFP via Getty Images

The Federal Reserve building is seen on March 2021 in Washington, D.C. The Fed's tapering of bond-buying and upping of interest rates is likely to be a slow, gradual process. Daniel Slim/AFP via Getty Images
Listen Now

The Federal Reserve has indicated it’s going to slowly start easing up on some of the support it’s been giving this economy by tapering bond purchases — starting as soon as next month.

Then, maybe, if all goes well, it may also start nudging interest rates up. This is the start of a process lots of economists, businesses and investors have been watching, waiting for and forecasting around.

“Yesterday I think the Federal Reserve did a very good job of, you know, setting a boundary between what ‘taper’ meant and what ‘lift-off’ will mean,” said Jamie Cox, managing partner of Harris Financial Group in Richmond, Virginia.

That is, the conditions necessary for winding down support compared to the more stringent conditions for actually raising interest rates. So, for now, consumers may only notice slight changes to the housing market, for example, said Daryl Fairweather, chief economist at Redfin.

“The window for which mortgage rates are at record lows is narrowing and could be over quite soon. In the short term, that could actually encourage more people to buy a home or to speed up their home search,” Fairweather said.

If all goes according to the Fed’s plan and the economy continues to stabilize, eventually, interest rates for things like credit cards and personal loans could start moving up, too.

However, “it’s hard to know where the economy or what the economy will look like in the middle of next year, and whether or not the pandemic is contained,” said Jack Kleinhenz, chief economist for the National Retail Federation. While the Fed has laid out the path that could get us to higher interest rates, Kleinhenz said, it’s starting with baby steps.