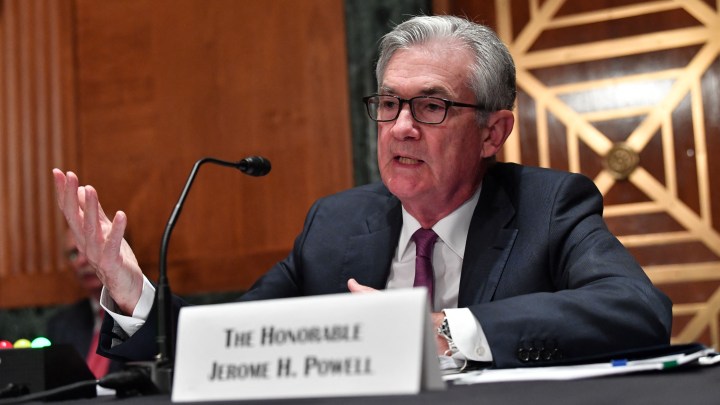 COPY
Federal Reserve Chair Jay Powell is expected to address the tapering of the Fed's bond-buying at an upcoming conference in Jackson Hole, Wyoming. Nicholas Kamm/AFP via Getty Images

Federal Reserve Chair Jay Powell is expected to address the tapering of the Fed's bond-buying at an upcoming conference in Jackson Hole, Wyoming. Nicholas Kamm/AFP via Getty Images
Listen Now

The Fed is increasingly signaling to financial markets that it’ll start pulling back some of the supports it put in place for the economy during the pandemic. The first step? Slowing down, or tapering, its monthly purchases of bonds.

Investors are expecting to hear more about this next week when Fed Chair Jay Powell speaks at a Fed conference in Jackson Hole, Wyoming. But how do bond purchases help the economy? And why does the Fed want to back off its bond-buying spree?

Think of the economy as a giant waterslide. The Fed has been pumping water down that slide to keep it going, buying at least $120 billion a month in bonds.

“They’re flooding the economy with money and, because of that, it will be easier for consumers to get loans with lower interest rates, as well as firms,” said Ann Owen, who teaches economics at Hamilton College.

Those firms could use those loans to expand, maybe hire more workers. But the Fed can’t keep pumping up the economy forever. At some point, said economist Claudia Sahm at the Jain Family Institute, consumers and businesses will be going down that economic waterslide just fine on their own.

“We’re going to get to the finish line, not with the Fed flooding us down the path all the way because we might overshoot and hit the wall at the end of the waterslide,” Sahm said.

In other words, the Fed might overstimulate the economy; but it also can’t just suddenly stop sending water down the slide.

“You’d really burn your backside if the water got turned off,” said Ken Kuttner, who teaches economics at Williams College. Investors could get burned if the Fed suddenly turned off its bond-buying spigot, he said.

“They would like to be well-primed, well prepared for anything that’s going to happen and that’s why Fed officials are starting to make very cautious statements,” he said.

So, they’re trying to telegraph the gradual tapering off of their bond-buying months in advance.