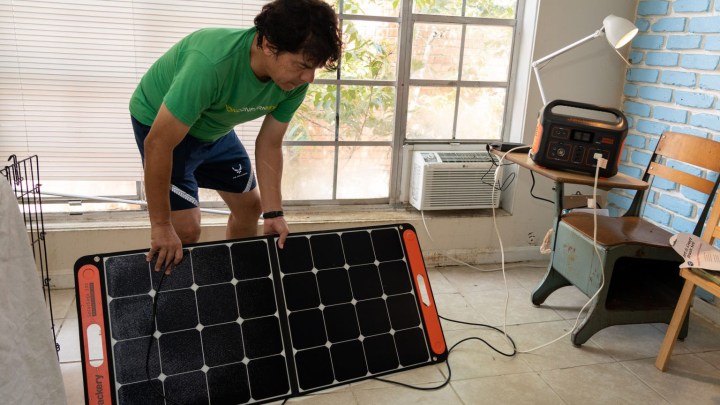 Antonio Martinez has lived in Houston’s Gulfton neighborhood for the past 25 years. Like many Houstonians, he dreads the summer spikes in his electricity bills.

“Electricity is always a concern, especially in the heat,” said Martinez, who teaches English as a second language.

So, Martinez started researching solutions. He participated in a local heat-mapping project and talked to his landlord about making the building more energy efficient. At one point, he decided to turn off his apartment’s central air conditioning.

“I actually bought a window unit to save money,” he said, adding that it’s much cheaper just to cool the area where he sleeps rather than the whole apartment.

So Martinez was interested when a fledgling company called Energy Well Texas reached out about a pilot program. Its pitch? Save money on your electric bill while switching to a 100% renewable plan.

Co-founder Greg Rosen said the idea came about through a research grant funded by the U.S. Department of Energy.

“The purpose of the grant is to enable low- and middle-income community residents to switch to 100% green power and to make those residents more safe during emergencies,” he said.

Energy Well Texas is able to offer 100% green power by buying vouchers from renewable energy companies that work with wind and solar.

For an initial six-month pilot program, it partnered with a retail electricity provider to design a renewable, fixed-rate plan and switched over a small number of households, including that of Martinez.

Rosen said he had expected customers in the pilot program to see savings of about 5% to 10%.

“We found that we were saving them a lot of money — 30%,” he said, with one participant saving more than 40% on electricity.

People who hadn’t changed their electricity plans in several years, and so were paying high rates, enjoyed the greatest savings, Rosen said.

And those savings can make a big difference to low-income families. Texas’ deregulated energy market offers lots of choices when it comes to picking an electricity provider. But in Houston, researchers found that households with less disposable income often end up paying higher rates.

Nationwide, low-income households spend a larger portion of their income on home energy costs, according to the U.S. Department of Energy.

And in Texas, roughly 3.8 million households spend about 10% of their income on electricity, according to Dana Harmon, with the Texas Energy Poverty Research Institute.

“People who are struggling with high energy burdens are forced to make trade-offs with limited resources,” Harmon said.

Food and clothing tend to be the most common things people forgo to keep the lights on, she said. “And we fear that sudden spikes due to heat waves or other extreme weather make those trade-offs more severe,” Harmon said. “And the more frequent they’re becoming, the more difficult it is for families to keep up.”

Extreme weather can also lead to extended power outages, which cause their own problems.

That’s why emergency preparedness is the second thing Energy Well Texas is trying to address. Residents can lease a backup solar-powered battery that can charge medical devices, boil water in an electric kettle or run a fan.

Martinez was given one of the backup batteries right before a massive storm hit Texas in February. He said he lost electricity for four days but was able to power some essentials.

“I was using the battery to charge my gadgets and my neighbor’s phones,” he said.

Martinez estimates he ended up saving $15 to $20 a month on his electricity bill. He was also brought on as a community adviser for the company to spread the word to his friends and neighbors.

Energy Well Texas aims to launch statewide by the end of the year.