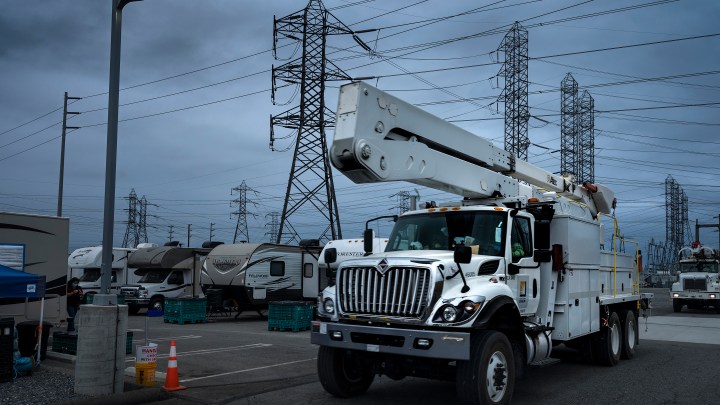 COPY
Investments in grids were already falling, and COVID-19 has slowed down upgrades even further. Brent Stirton/Getty Images

Investments in grids were already falling, and COVID-19 has slowed down upgrades even further. Brent Stirton/Getty Images
Listen Now

Blackouts in California point to an important reality: The entire U.S. has an old electric grid. In California, the infrastructure was built in the 1960s and ’70s. Investments in grids were already falling, and COVID-19 has slowed down upgrades even further.

Electricity is one of those things, kind of like running water, where Americans only notice it’s not there … when it’s not there.

Mark Dyson, a principal with the Electricity Practice at Rocky Mountain Institute, said blackouts that people experience in California are due to a whole lot of things going wrong all at once.

“It’s very hot in the state, leading to near record levels of electricity demand,” Dyson said. “And there’s a historic heat wave affecting much of the Western United States as a whole, meaning that California is no longer able to rely on imported electricity from other neighboring states as it often does during peak periods.”

The current grid was designed and built a long time ago, before climate change accelerated energy demand and wind and solar power were a main part of the energy mix.

“Before the incorporation of all these renewables and other things, you have the load profile, and then you just turn power plants on and off to meet the load profile,” said Brian Tarroja, a researcher in the Advanced Power and Energy Program at the University of California, Irvine.

Some blamed California’s adoption of renewable energy for triggering the blackouts, but Tarroja said that’s an oversimplification. The real culprit is a lack of integration of these renewables and the difficulty of getting all that power where it needs to go.

Another issue is that there’s no incentive for utilities to update. They’re inclined to change things when they have to.

“If you’re going to wait until a component fails or until a component is past its lifetime to replace it with something that’s more amenable for carrying out this zero-carbon energy transition or something, it’s going to take a really long time,” Tarroja said.

Resilience to heat waves and rolling blackouts matter but more of the “grid of the future” conversation is surrounding resilience to high-impact, low-frequency events like hurricanes, floods and even cybersecurity breaches.

Kate Davis studies this at Texas A&M University. “Looking at how we can better utilize the resources that we have and control the grid better,” she said. “And then longer term it’s looking at how you design the grid of the future and what changes would need to be made.”

She said design and storage is the next challenge. California is building huge lithium-ion battery fields, but even the best batteries can store only a few hours’ worth of power at a time, so a lot gets wasted.

The grid of the future is just that until engineers and utilities make it profitable to provide seamless service regardless of the weather.