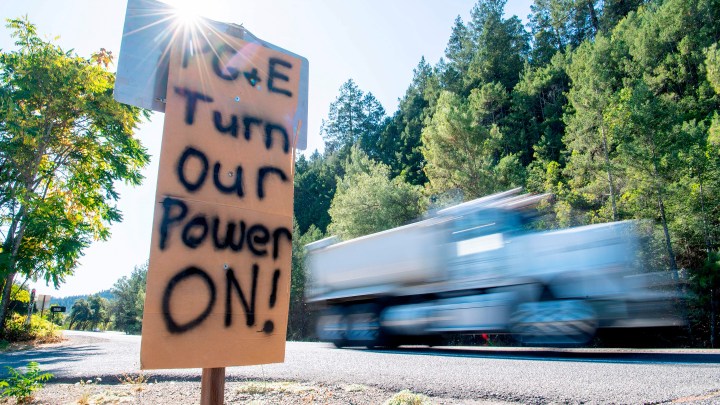 COPY
A sign in Calistoga, California, calls on PG&E to turn the electricity back on during a statewide blackout in October 2019. Josh Edelson/AFP via Getty Images

A sign in Calistoga, California, calls on PG&E to turn the electricity back on during a statewide blackout in October 2019. Josh Edelson/AFP via Getty Images
Listen Now

Tori Amoscato was practicing scales on her electric piano in her Los Angeles apartment when all of a sudden, the sound just stopped.

“The power went out around 4 o’clock on Saturday, and it didn’t come on for another 20 hours,” she said.

She assumed it was one of those scheduled blackouts she had heard about happening in her neighborhood, but her outage was due to a busted transformer.

“We call these heat storms for a reason,” said Jeff Smith, a spokesperson for PG&E, one of the main providers of electricity in California. Smith said when temperatures don’t drop at night as much as they normally do, power lines can be taxed to a breaking point.

But most of the quarter of a million customers who didn’t have power this weekend were without it because the California Independent System Operator (CAISO) told PG&E and other electricity providers to shut off power to decrease load.

It was the first time California had returned to rolling blackouts because power supply couldn’t meet demand in almost 20 years.

But Leah Stokes at the University of California, Santa Barbara, thinks CAISO, the grid operator, might have been too conservative.

“The amount of extra power that we had on the grid was really big and very manageable, so I think that it seems like the grid operator jumped the gun in terms of being a little paranoid,” she said.

But Michael Wara at Stanford said CAISO was being paranoid for a reason. If the grid operator had not been conservative, the consequences for the western United States could have been catastrophic.

“If California were to have a true crisis and unplanned system outage, that would not stay in California,” Wara said.

Power outages would spread to states like Nevada, Arizona and Oregon. Those states bordering California are closely connected in the Western grid. Wara said the real problem right now in California is not a lack of energy supply, it’s an old, inefficient grid. 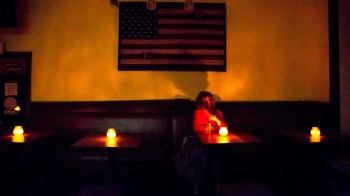