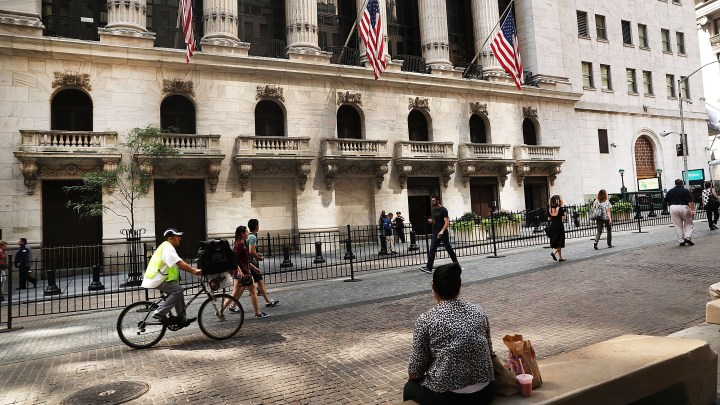 COPY
People walk outside of the New York Stock Exchange in August 2016. At the Fed's Jackson Hole summit, economists expect discussions about the Fed's role in minimizing inequality. Spencer Platt via Getty Images

The Federal Reserve’s Jackson Hole Symposium is an annual get-together of central bankers, economists, researchers and financiers. It’s virtual this year, and the theme is “Macroeconomic Policy in an Uneven Economy.”

Wrapped up in that boring title is years of debate and controversy over exactly whose economy that macroeconomic policy has been serving in a country with great inequality — and what the Fed can do about that.

The Fed’s job is to keep the economy hot enough so as many people as possible have jobs, but not so hot that we get too much inflation. But when we refer to the economy, whose economy are we talking about?

“Black and brown workers live in an economy that we generally, as a country, would consider [to be in] recession almost all the time,” said Claudia Sahm, a senior fellow at the Jain Family Institute, referring to the fact that Black unemployment has been twice white unemployment for decades.

“The Fed cannot, with the tools at its disposal, directly converge differences in unemployment rates or wage gaps,” said Adam Posen, president of the Peterson Institute for International Economics.

The tools Posen is talking about amount, in a nutshell, to nudging interest rates. That’s the equivalent of pressing the gas or tapping the brakes in the economy. It may not affect inequality directly, but it does affect it indirectly — that’s because the longer the economy gets the gas, the more that disadvantaged people can benefit.

“Don’t let your foot off the gas before you get to the destination,” Posen said.

The concern in years past was that by applying the gas pedal for too long, the Fed might create inflation. “You’re going to run off the road or blow out the engine,” Posen said.

But he said that after the Great Recession, it became apparent that fear was overblown. Many more Americans could have been helped by a hotter economy during that period.

The Fed could have aimed for a lower unemployment rate, wage growth could have been higher. Benjamin Dulchin directs the Fed Up campaign, which has been pushing the Fed to change its approach. Failing to stimulate the economy has contributed to generational poverty, he said.

Still, some question the idea that the Fed, in pressing the gas for longer than it has in the past, can help Americans without causing inflation.

“There’s no theoretical reason that it has to work this way. It’s not proved and there’s no theory that says it has to be true,” said Anil Kashyap, a professor at the Booth School of Business.

That is the Fed’s hope, though, Kashyap said. The Fed has very clearly taken some lessons from the last recession, and it’s reasonable to expect the foot on the national gas pedal will be a little heavier this time around.