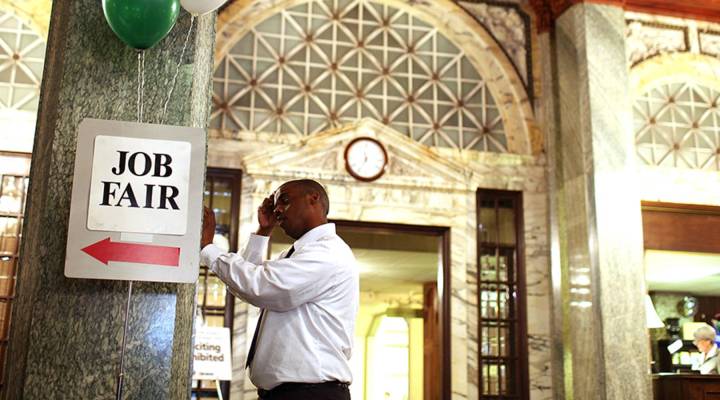 COPY
A job seeker fills out a registration form as he waits to enter the San Francisco Hirevent job fair at the Hotel Whitcomb on March 27, 2012 in San Francisco, California. Justin Sullivan/Getty Images

A job seeker fills out a registration form as he waits to enter the San Francisco Hirevent job fair at the Hotel Whitcomb on March 27, 2012 in San Francisco, California. Justin Sullivan/Getty Images
Listen Now

Unemployment is low across the board now: in February, the rate was 4.1 percent for all workers. Unemployment was 6.9 percent for African-Americans, just 0.1 percent above the all-time low reached in December 2017. (The Bureau of Labor Statistics has been tracking unemployment by race since the early 197os.)

And yet, as has been true for the past several decades, African-American unemployment remains about twice as high as white unemployment. Over the past 12 months, black unemployment averaged 7.4 percent, compared to an average of 3.7 percent for whites.

Also, in recent years, African-American women have been starting their own businesses at the highest rate of any demographic group, according to data compiled in a report by the Institute for Women’s Policy Research and the National Domestic Workers Alliance.

Analyst Janelle Jones at the Economic Policy Institute called the recent decline in African-American unemployment “real improvement, it’s a positive trend for black workers.” But she pointed out that other measures of job market success for African-Americans are not as remarkable. “Discouraged workers, underemployed — those are definitely still high for black workers.”

The Labor Department defines “discouraged workers” as those who want a job but have given up looking and the “underemployed” as people working part time because they can’t find full-time work.

In the past decade, the racial gap in unemployment should have narrowed more, given rising levels of education and job skills among African-Americans, Jones said.

“The way educational attainment has grown for black workers, we should see more of a payoff,” she said. “People who have some college, a bachelor’s degree, an advanced degree —compared to their white counterparts, black people are more likely to be unemployed.”

Katie Augsburger knows all this well. She is 38 and recently launched Connected, her own human resources consulting firm in Portland, Oregon, to help employers attract and retain more workers of color, like herself.

“I went through a layoff at my last organization and it shook me up,” said Augsburger, who had been earning around $100,000 a year as a senior human resources manager at a small design firm and was worried about paying her mortgage. “Panic went through my head. I’m a single working mom, and even though the job market says unemployment is low, it’s really hard to find a good job that is going to not just keep you surviving, but thriving.”

Katie Augsburger of Portland, Oregon, recently founded her own HR firm, Connected, to help companies attract and retain workers of color, like herself.

Augsburger doesn’t believe she was laid off because of her race. Her company was struggling and downsizing as a result. But she never quite felt like she fit in.

“I was in this group of all-white people who were pretty affluent, and that is not my upbringing, that is not my experience,” Augsburger said. “So when I got laid off, that kind of reaffirmed for me that I didn’t belong. A lot of our diversity and inclusion work in companies is about making white people comfortable with brown faces. It’s not about making brown people comfortable to work there.”

Augsburger’s advice to companies trying to create a more hospitable working environment and advancement opportunities for people of color: provide basic training to all workers; be open to conversations about employees’ racial and socio-economic backgrounds; ask them what they need — perhaps subsidized transportation or child care — to create a more level playing field so everyone can succeed.

“I got the proverbial phone call — they were reducing the project,” Smith Soeder said. “I was last hired, and you know what happens to the last hired. This is the first time I’ve been unemployed without a safety net.”

Smith Soeder is African-American and owns her own home in Sarasota, Florida, where she lives with her teenage son. She has two grown daughters who live out of state. She has a B.A. in business and an M.A. in psychology; she has decades of corporate experience, ranging from outside sales and franchise management to senior leadership in HR departments, specializing in diversity training and minority recruitment.

Early in her career, she recalls being the only African-American member of a management team that got together twice a month after work to play cards. The game was euchre.

“They would go to someone’s house,” Smith Soeder said. “Not only was I never invited to go play euchre, but one of my co-workers used to come to my office to find out if I had any ideas for what she could make as an hors d’oeuvre to take to the game.”

Smith Soeder had no interest in playing euchre, but she said she paid a price in terms of career and income advancement by not being included.

“This is where they talk about the jobs that are coming open in the company, the different leaders, what area is moving, which one’s not. It’s a very informal system.”

She’s tried to challenge such informal systems of excluding women and minorities at work using stories like this in the diversity trainings she runs as an independent HR consultant. But now, facing unemployment, she’s also working to develop a new entrepreneurial career as an actress and writer.