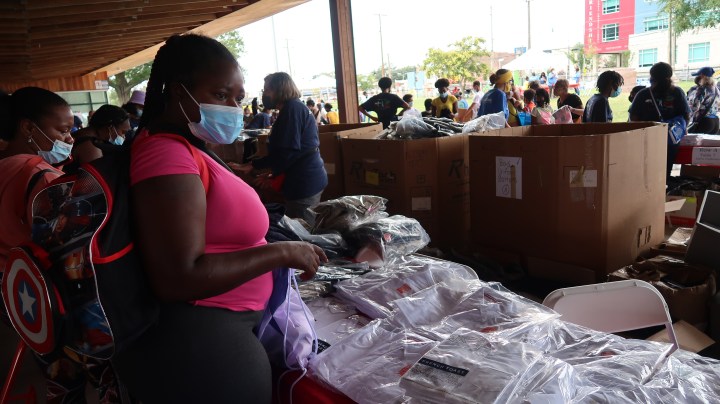 This time of year, many communities across the country are holding back-to-school giveaways, handing out free backpacks and school supplies to low-income students. And with many families still feeling the economic effects of the pandemic, crowds are bigger than usual at many of these events. In Washington, D.C., almost 5,000 kids showed up with their families for the Get Ready 4 School Giveaway on a Saturday in late July.

“What the pandemic did was exacerbate all of those issues,” said Kim Ford, CEO of the nonprofit Martha’s Table, one of the event’s organizers. “People lost their first job, they lost their side hustle, nobody was taking Uber or Lyft anymore. Those who worked in hospitality, in the restaurant industry [were affected]. So we just saw this massive avalanche happen.”

That was the case for Alexis Whitley, who showed up half an hour early to the D.C. event with her five children, joining a line of people already waiting to get in. Whitley said she’s been out of work since the start of the pandemic.

“I was actually working at the Nationals [baseball] stadium, and they shut it down last year due to COVID. And my kids have been home-schooled since that,” she said.

Many of the other items at the giveaway came from companies including Hanes, Jockey, American Eagle Outfitters and Gerber Childrenswear, provided by the nonprofit Delivering Good. The organization takes excess inventory from companies and routes it through charities to deliver the items to those in need. The group has had more donations than ever.

“In 2020, we distributed the most that we have ever distributed in our 36-year history. So, 70 million items to people in need,” said Lisa Gurwitch, Delivering Good’s president and CEO. Usually, she said, they receive 10 to 11 million items in a year. “And this year, we’ve already exceeded our product goal, but we are not done. There are still so many people who could make great use of these items.”

Whitley said she has been looking for a job but has struggled to find reliable child care.

Even though the giveaway was billed as a back-to-school event, the rows of tables at the large, outdoor pavilion also held baby clothes, adult undergarments, masks, hand sanitizer and free groceries. One of the most popular tables had stacks of school uniforms.

Organizers said more people are showing up to events like this due to the pandemic’s economic costs, but there are also more items to give away. Monumental Sports and Entertainment Foundation, the charitable arm of Washington teams the Capitals, Mystics and Wizards, was also an event organizer for the D.C. giveaway. The foundation donated T-shirts, towels and sports gear the teams couldn’t sell or hand out at closed stadiums and arenas.

“We know that we went through a retail apocalypse when everybody was closed. And then many companies had to close at least some of their stores permanently, and those were tough decisions,” Gurwitch said. “So there were many items, including seasonal items, that could no longer be sold when these stores reopened.”

By donating their excess inventory rather than destroying it or sending it to landfills, Gurwitch said, companies can get tax benefits, but also, more importantly, send a signal about their brand.

Extra inventory has been a struggle for retailers throughout the pandemic, said Lauren Beitelspacher, who teaches marketing at Babson College.

The pandemic has made it extremely challenging to thread that needle, Beitelspacher said. Retailers could sit on unsold inventory, with hopes of selling it later. But they often have contractual obligations to their vendors.

“So even if they had excess inventory from last year, they still had maybe some obligations to some of their top vendors to continue to buy stuff going into the school year,” she said.

For the thousands of families that showed up at the D.C. event, all that donated merchandise means a lot of items crossed off the back-to-school shopping list.

Whitley and her children left the Get Ready 4 School Giveaway with large bags of supplies.

“We’ve got glue, paper, notebooks, composition books, uniforms, some fruit — a lot of things!” Whitley said. All of which, she added, goes a long way to helping her family get ready for fall.