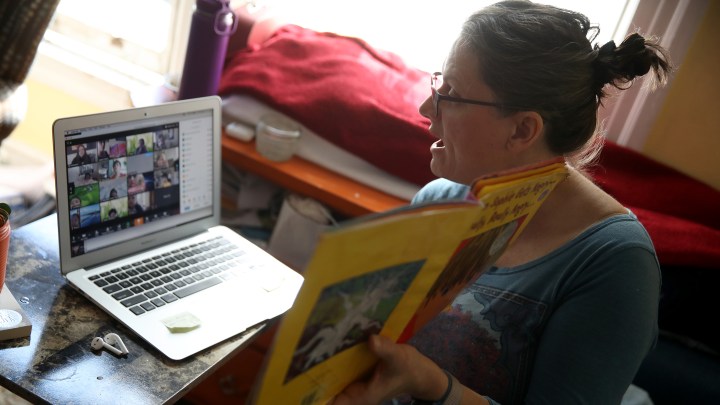 COPY
The burdens on families include paying for devices, internet connection and lunches, but also concerns about career growth for parents. Justin Sullivan/Getty Images
Parenting in a Pandemic

The burdens on families include paying for devices, internet connection and lunches, but also concerns about career growth for parents. Justin Sullivan/Getty Images
Listen Now

We have parents, students, teachers and school adminstrators across the country worried about how to safely pull off this new school term and still get people educated. A new study Thursday morning from Bankrate suggests people are not just worried about the quality of education and scheduling, but also what online or partial online learning will do to their finances and careers.

Marketplace’s Kristin Schwab has more, and the following is an edited transcript of her conversation with “Marketplace Morning Report” host David Brancaccio.

David Brancaccio: Where are parents spending their money?

Kristin Schwab: There are a lot of costs that come with school from home. Parents can’t depend on school lunches and special learning programs. And of course there’s the technology upgrade for households that don’t have the internet or need a better connection. Plus, families with multiple kids need multiple devices.

Brancaccoi: And many parents who are asked to work from home and also feel they have to lend time and energy to their child’s online learning. That can be a lot.

Schwab: The study shows parents are worried they’re missing out on career growth. And yeah, part of that has to do with time, with respondents saying they’ll have to work fewer hours. Even more alarming, 15% of parents say they may have to stop working altogether.

Brancaccio: And the burdens among families aren’t equal.

Schwab: Of course, like everything else in this pandemic, the financial burden of online learning is not equal. Ted Rossman, an analyst at Bankrate, says millennial parents feel they’ll be affected the most.

Ted Rossman: They’re the most likely to have younger kids. And I think that that poses a whole other set of challenges with remote learning and with child care and just making it all work.

Schwab: It doesn’t help that millennials in general have little financial stability. They’re less likely to own homes and more likely to have student loan debt. And those things add to the daily stresses and finances of getting through this pandemic.