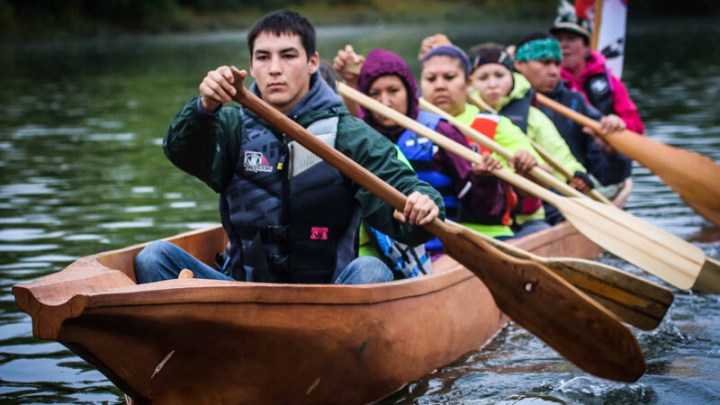 COPY
Nez Perce tribal members paddle on the Snake River in a canoe they carved as part of a culture and environmental learning project supported by the Potlatch Fund. Courtesy of Potlatch Fund

Nez Perce tribal members paddle on the Snake River in a canoe they carved as part of a culture and environmental learning project supported by the Potlatch Fund. Courtesy of Potlatch Fund
Listen Now

The twin shocks of the COVID-19 pandemic and racial justice reckoning have changed how some philanthropists and foundations go about their business. Now, some are starting to focus on nimbleness, fewer strings and equity. A Native-led grantmaking nonprofit based in Seattle shows how these trends are playing out on the ground.

The Potlatch Fund focuses on Native American well-being in the Pacific Northwest. Before the pandemic, it had established grant programs for Native arts, language preservation and community building. When COVID-19 took hold, it pivoted.

The Potlatch Fund mainly gets its money from private foundations and tech industry donors. It isn’t going back to its old ways with reopening and recovery underway. The nonprofit put all its grantmaking resources this year into a single campaign dubbed the Resiliency Fund.

“Now (we) have since come to a place beyond response and looking at more long-term support for our Native communities,” Hill-Scott said.

Hill-Scott said she admires the example set by billionaire philanthropist MacKenzie Scott — also of Seattle, but no relation — who minimizes paperwork and trusts grantees to spend wisely. The ex-wife of Amazon’s founder made waves in philanthropic circles beginning last year by giving out multimillion-dollar unrestricted gifts to hundreds of organizations and institutions.

Potlatch used the “trust-based” model in June when the nonprofit put $1 million on offer to be distributed in $10,000 to $15,000 chunks. The idea was to help as many people as possible, as quickly as possible. Hill-Scott said it took just three weeks for more than a million dollars in requests to come in.

“Wow! This money is going to go out the door quickly,” Hill-Scott said, describing her reaction in the moment. “Obviously, there is a huge need.”

Kummer (Makah) said the majority of the grant applications so far came from individual Native artists. They included beadworker Robyn Pebeahsy (Yakama/Comanche) of Toppenish, Washington, who wants to expand into the podcasting realm.

“I know there are so many other similar stories out there with our Indigenous beaders and our community of how important Indigenous art is — not just because it looks pretty, or it represents where we are from and all this other stuff — but sometimes it’s the only thing that can get us through a really tough time,” Pebeahsy said.

Pebeahsy said she would apply the money she received to editing and production support for podcast series that could go in a number of different directions. Themes she teed up included beading or listening to stories from the reservation, or spurring on a young podcast she co-produces with three friends about the missing and murdered Indigenous women crisis.

“Finding my own voice, finding the voices of people who looked or sounded like me or had lives similar to mine is something I never always saw,” Pebeahsy said. “We need our own stories.”

Pebeahsy said this was the first time she applied for any grant, having been daunted by application requirements before. Potlatch’s Resiliency Fund grant application poses just eight questions and dispenses with a detailed budget expectation.

Hill-Scott said the pressure is on her organization now to replenish the Resiliency Fund. She said she hoped to receive future grant applications from more tribal groups that provide support services to Native populations in Oregon, Washington state, Idaho and Montana — for example in the health, education and cultural revitalization fields.