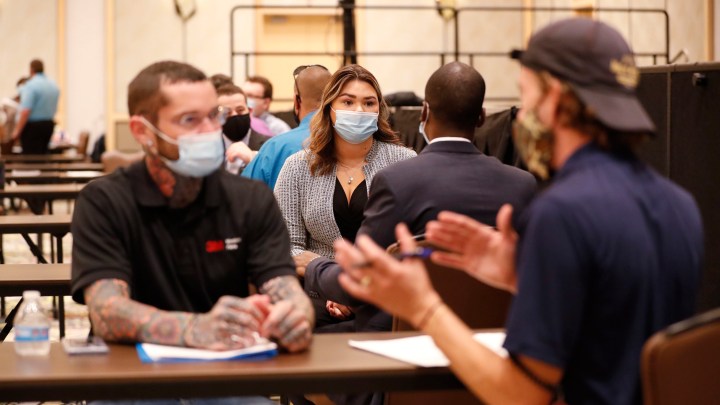 COPY
A job fair and interviews are hosted at the Seminole Hard Rock Casino in May 2021 in Tampa, Florida. Octavio Jones via Getty Images

A job fair and interviews are hosted at the Seminole Hard Rock Casino in May 2021 in Tampa, Florida. Octavio Jones via Getty Images
Listen Now

No matter how many new jobs have been added to the mix in July, employers are still going to be millions of workers short.

So, who you gonna call? In the past, it might have been a temp. There’s only one problem: Temps are in short supply too.

There are millions of open permanent jobs out there, some with signing bonuses.

“It’s kind of like getting married, with less than a full date,” said Richard Wahlquist, president of the American Staffing Association.

Temping is more like a job Tinder. You see if you’re a match and maybe stick around if you hit things off.

Also, “the wages are up around 5% this year,” said Greg Palmer, who heads up a temp-industry consulting firm. That’s overall, he said health care and IT workers are making a lot more. Administrative assistants and receptionists? Not so much.

“The pandemic has created an environment where those jobs are just never going to come back,” Palmer said.

In response, many temp agencies are beefing up training programs, in things like “welding, forklift, things that temporaries may not have had access to in the past,” said Amy Glaser with temp agency The Adecco Group.

She said the temp business itself is getting better too — fewer temps are ghosting their employers.