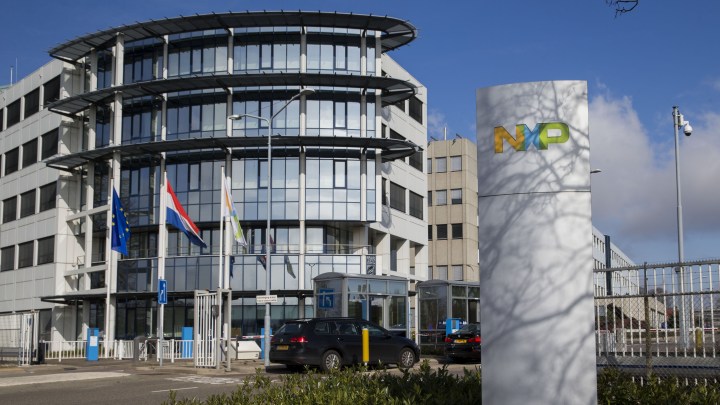 You may not have heard of the Dutch semiconductor company NXP. But if you’re in a car right now, you’re probably near one of its products. The company is one of the top suppliers of computer chips to the auto industry.

It releases earnings after market close on Monday, and analysts say those results could give us a hint at how long the chip shortage will last.

“Within that space, NXP is number one or number two, depending on the year, in terms of its position,” said Anand Srinivasan, a senior technology analyst at Bloomberg Intelligence.

“They’re commonly seen as a bellwether for the industry, in that they supply so many different components of the car,” said Anshel Sag, a senior analyst at Moor Insights and Strategy. “If their earnings are good, that probably looks like some kind of a rebound in the industry.”

NXP makes semiconductors that go into both the body and brain of a car. Its chips make seats recline, tell windows to roll up and even let the car give advice to the driver. Lars Reger, NXP’s chief technology officer, says the company is operating flat-out right now to produce all the chips companies want. And they want a lot.

Chip production isn’t the kind of thing that manufacturers can ramp up really quickly. And there have been changing demands on chip production since the pandemic began. Last spring, when lockdowns began in earnest in the U.S., automakers slowed things down.

“The auto industry says, ‘Okay, demand is evaporating, and I need to cut production,’” said Bloomberg’s Srinivasan. “So they went, turned around and cut orders big time with all of their chip makers.”

Then, last summer, carmakers started offering big discounts, and people were ready to get outside and go for drives. But when car companies were ready to order chips again, they’d lost their place in line.

“That has been pretty much the crux of the issue, those chips just went other places,” said Jessica Caldwell, executive director of insights at the car shopping site Edmunds. “There wasn’t really a way to get them back. So [the automakers] kind of had to join the queue.”

On top of that, carmakers can be challenging customers.

“Their requirements are quirky, they need to be long lasting, the design cycles are extremely long,” Srinivasan said. “They are a little bit higher maintenance, if you may, compared to the PC food chain and the smartphone food chain.”

And people stuck at home have been demanding more PCs and smartphones, along with newer technology like smart speakers, smart thermostats and smart credit cards.

NXP makes lots of these Internet of Things devices, too.

“Normally, we take about a decade to get all our new innovation accepted by the people,” said NXP’s Reger. “These disruptions were mega-accelerated by the pandemics.”

All that has meant fewer cars to sell — and higher prices and fewer choices for consumers. In the short term, some automakers are selling cars that are less technically sophisticated.

“Maybe the customer is not going to have the fanciest rearview mirror in the world,” Caldwell said. “But most people will be okay with that.”

“The electronics content is shooting up big time and the demand is very high so that the automotive semiconductor industry has a hard time supplying the existing demand for the modern cars,” Reger said.

Looking ahead, the push for autonomous vehicles will create even more demand for chips. Perhaps that’s obvious.

“Let’s hope those involve a lot of computers. If not, there’s a problem,” Caldwell said.