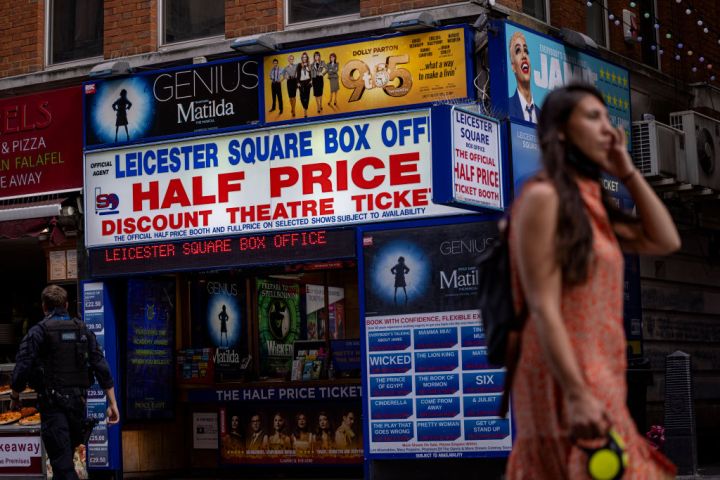 As fully-vaccinated people from America and the European Union begin to travel Monday quarantine-free to the U.K., London’s theatre industry is hoping the bright lights of the West End will lure entertainment-seeking tourists to help bolster their pandemic-ravaged bottom lines.

The continued relaxation of Britain’s travel rules is a relief for the thousands of people who work in theatres across the country. One of those workers is Thomas Inge, an actor who has plotted his own unique path forward through the pandemic. Like many others in the industry, he found himself suddenly out of work when theatres went dark last March. To make ends meet, he found a job as a supervisor in his local grocery store before going to South Korea to perform in the musical, “Cats.”

This weekend, though, Inge was back under the bright lights of the West End as part of the ensemble in a production of “Singin’ in the Rain.”

“I think we’re all pinching ourselves that it’s actually happening,” he said. “’Singin’ in the Rain’ is such a wonderful, uplifting show. But there is a bit of nerves.  It’s a new show, I’ve never done it before, and we’ve had a short, very technical process to get into the theatre.”

The show must go on, but with pandemic guidelines in place. Sadler’s Wells Theatre is back to full capacity but theatre staff will continue to wear face masks and it’s advising visitors to wear them, too. It’s also maintaining one-way routes through the venue, and providing hand sanitizer at entry points. But it doesn’t stop there. Backstage, Inge said actors are tested every day for the virus, and the directors have tweaked plot lines and split the cast into bubbles to try to prevent potential sickness from taking down the whole show.

“In my dressing room, we don’t have two people that cover the same role. In case one of them goes down, our whole dressing room will isolate. But it means they can still do the show because we are not sort of in close contact with those people,” he explained.

At a theatre across town, staffing is one of many concerns top of mind for Eleanor Lloyd. She’s the producer of an Agatha Christie play, “Witness for the Prosecution” and president of the Society of London Theatre.

“It’s a huge problem for theatre. There are shows having to be cancelled all over the place,” she said.

The so-called pingdemic has sent shockwaves through the U.K. labor market, causing a range of problems including delays in food deliveries to supermarkets, and worker shortages across many industries. It happens when the National Health Service track and trace app sends a message to a person who had close contact with someone who tested positive for COVID-19. If a worker is “pinged,” they must isolate for 10 days.

Lloyd said productions can, in many cases, survive shutting down once. But beyond that, it becomes more difficult because there is no ticket income, and it’s hard to pay workers and rent. The Society of London Theatre estimates 70% of theatres will run out of cash by the end of the year. So, they’re calling for more support from the U.K. government to help the industry stay afloat.

“We’d like to see a test-to-release system so if somebody has been a close contact of a positive case, they can be tested and as long as they test negative, they can continue to come to work,” Lloyd said. “And then the really big thing we need is insurance. We are unable to get cancellation insurance for anything to do with COVID.”

Despite the uncertainty, Thomas Inge is hopeful.

“I’ve gone to see a few other shows over the last couple of weeks and it’s just been wonderful and the audience reaction was amazing. And I know ticket sales are doing really well for ‘Singin’ in the Rain.’ We’re really positive that the audience is going to love it and feel confident and come to the theatre.”