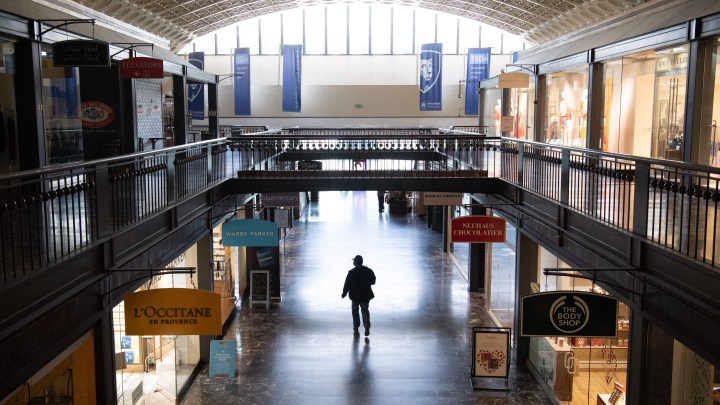 COPY
Many businesses were still closed at Union Station in Washington, D.C., in May. GDP grew 6.5% in the spring quarter, rebounding after the pandemic lockdown. Saul Loeb/AFP via Getty Images
COVID-19

Many businesses were still closed at Union Station in Washington, D.C., in May. GDP grew 6.5% in the spring quarter, rebounding after the pandemic lockdown. Saul Loeb/AFP via Getty Images
Listen Now

U.S. gross domestic product grew 6.5% from April through June, a figure that was less than many economists were expecting. It does, however, mean that our economy has caught up to where it was before the pandemic started.

Technically, though, we’re still behind.

In the first half of 2020, the economy lost $1.9 trillion. At one point we were down 22 million jobs, and 11.3% of economic output disappeared into thin air.

“This is the largest decline in GDP the U.S. has experienced since World War II,” said Constance Hunter, chief economist at KPMG.

Just as dramatically, we’ve managed to reverse that decline. According to Thursday’s data, it was sometime this spring that we got back to where we were before all the lockdowns.

But that’s not the same as getting to where we would be now if the pandemic had never happened and the economy had kept growing.

“People still graduated from high school, graduated from university ready to hit the workforce,” Hunter said, “and they were hampered from doing so because of the pandemic.”

So when do we get to the point at which it’s like the pandemic never happened?

“That’s going to take a bit longer, and it’ll probably happen around the second half of 2022,” said Paul Ashworth, chief U.S. economist at Capital Economics.

His estimate is conservative. Some economists think we could be completely back by the end of this year.

“It’s possible. It all depends on what happens in the second half of the year in terms of economic growth,” he said.

But the U.S. lost more than just the economic output it has to regain. It also lost jobs.

“Jobs might take longer. We’re about 70% recapturing the jobs lost since the onset of the recession,” said Lindsey Piegza, chief economist at investment bank Stifel.

When it comes to how the delta variant of the coronavirus will affect the progress we’ve made, economists say they aren’t totally sure. Piegza said there are people for whom the health threat changes things.

“That’s going to impact their decisions on how they behave on everything from eating out to going back to the office,” she said.

But there are millions of people, vaccinated and not, for whom the delta variant changes nothing, she said, and who will continue to go about their economic lives.