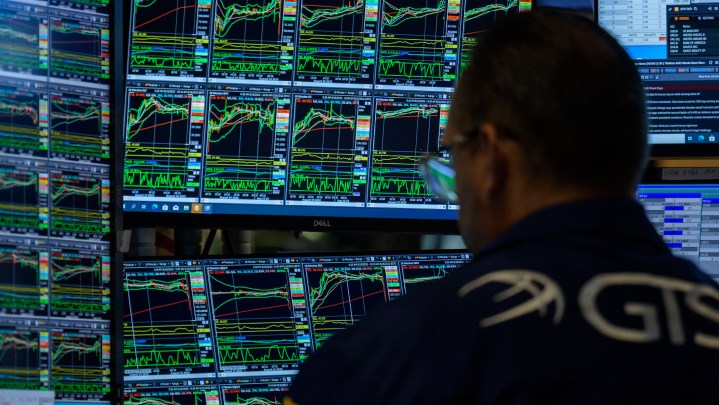 COPY
Measure all spending in an economy and all income in an economy, and they should be roughly the same. New figures show that's not the case right now. Angela Weiss/AFP via Getty Images

Measure all spending in an economy and all income in an economy, and they should be roughly the same. New figures show that's not the case right now. Angela Weiss/AFP via Getty Images
Listen Now

Turns out the economy didn’t shrink quite as much as we thought last quarter. The government released a revised estimate of gross domestic product, the sum total of all the goods and services in the entire economy.

The latest estimate says the economy contracted the equivalent of 0.6% per year in the second quarter. That’s better than the originally estimated shrinkage of 0.9%.

But here’s the thing about economic numbers: They can be a little fuzzy.

There’s another measure of the economy out there known as GDI, or gross domestic income. And according to that, the economy hasn’t been shrinking at all.

Now, if instead you measure not the spending but all the income in the country — for people, for businesses, for governments — you call that gross domestic income, or GDI.

“These should get to the same answer, because everything that’s spent is another person’s income,” Pearce said.

But guess what? They don’t. They are spitting out totally different answers.

GDP shrank at an annualized rate of 1.6% in the first quarter of the year, and shrank again by 0.6% in the second quarter, according to recently revised estimates.

GDP’s alleged economic identical twin, GDI, on the other hand, increased 1.8% in the first quarter, and increased again 1.4% in the second quarter.

According to income, the economy’s overheating. According to spending, it looks like a recession.

“It’s a pretty big difference,” said Jonathan Pingle, chief U.S. economist at UBS. Many of these data sources are not comprehensive in the way that the Census might be,” he said. Different surveys, different samples, different sample sizes, and different times certain data are recorded all come into play.

But this doesn’t really account for just how off these two numbers are right now.

The official term for the divergence between GDP and GDI is simply the “statistical discrepancy,” and it’s usually not large. The early pandemic year of 2020 saw a divergence between the two emerge, and it was attributed to the fast moving and chaotic economic changes the country was undergoing. The gap narrowed in 2021, Pingle added.

But it has reemerged. “The divergence now is stark enough that it raises real questions about where the economy stands,” he said.

With more time and more updated data, we might get answers. For now, it’s an economic puzzle.